I spend a lot of my crafting time dedicated to swaps.  The basic idea of a swap is that you fill a box full of goodies based on a theme as well as your spoilee's likes and dislikes.  Meanwhile, someone else does the same for you.  It's like Christmas year-round.  As I've already mentioned, I've just wrapped up a series of swaps.  Which means that the other week I received the last of my own packages,  themed around the magical world of Disney.

'Beauty and the Beast' will always be my favorite Disney film.  What I wouldn't give to be Belle.  Heck, just to have her library!  But over the two months of crafting for the swap, I also rediscovered a love of 'Sleeping Beauty'.  The animation is gorgeous, and something that the smartest computer couldn't possibly recreate.  Add Maleficent, so deliciously evil.  She's not just out to destroy the princess, she wants her and her prince to survive so they can suffer all the worse.  And for what?  Not getting invited to the baby shower?  Love her.

But my favorite part of this film is the three fairies: Flora, Fauna, and most of all, Merryweather.  She's fun and feisty, even in the face of the elegant evil of Maleficent.  And she made everything blue, my favorite color as a child, constantly battling with Flora, who made everything the far more conventional princess pink.  Of course, I love pink as well, but blue made me a rebel, so I liked that.

I don't know if that had any influence on some of my recent yarn purchases, but they have been distinctly blue.  I had noticed a while ago that though I love blue, I didn't have a lot in my stash.  I would say that I have now rectified that oversight, but that would mean I don't have an excuse to get more, so I won't.

Somehow, my wonderful spoiler knew that I was rediscovering my Merryweather love, and she made me the most amazing knitted doll of her.  I wanted to show off the amazingness of her work, and display a little stash while I'm at it, so here is my very own Merryweather, making it blue: 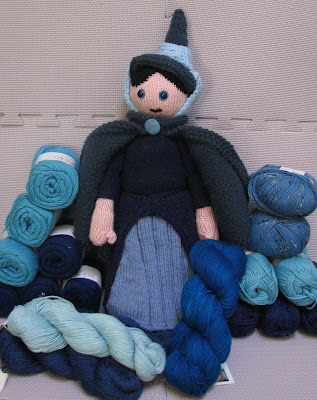 Isn't she great?  She has a cape, wings, underskirt and bloomers, even thumbs!  My spoiler said she was the most challenging toy that she's ever made, and I believe it!  It's always a little overwhelming to look at a handmade when you know how much work went into it.  For you.

So Mickey might be the keeper of the Disney magic, but I think knitters have plenty of their own to share.
Posted by unionjgirl at 11:05 AM