Andy lost.  Sad face.  But there's another Andy to root for, Andy Murray.  Because the sheer explosion of exhuberance that would follow a British win at Wimbledon is enough to make it a desired outcome.  It's been decades since they had a champion at the Championships, and though I'm sure many would wish that Murray was an English gent rather than a Scot, that's part of what makes it great.

To spread the joys of Wimbledon, I decided to make something with strawberries this week.  Strawberries and cream are one of the many traditions at Wimbledon, along with the players only wearing white, and Andy Roddick raising my hopes only to dash them.  I scoured the web for the most appropriate treat, and decided on the White Chocolate Strawberry Blondies from love & olive oil.

Other than adding one or two strawberries extra, I followed Lindsay's recipe exactly.  Luckily the 8x8 pan fits in the countertop oven, so I was able to keep the additional heat in my Texas kitchen to a minimum.  Here's what came out: I think I should have taken it out maybe one or two minutes earlier, as my edges were a little burned.  This might also be because the pan was quite close to the heat source.  But other than my own folly, this is tasty.  The melted chocolate in the batter really gives it a yummy flavor and a nice texture.  It's somewhere between cakey and chewy.

This one didn't inspire anyone to drop by my cubicle and gush over the deliciousness, but they did disappear over the course of the day. 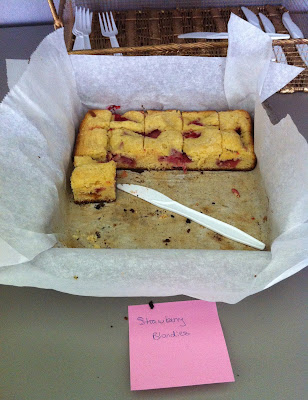 Now to decide on next week's treat...
Posted by unionjgirl at 9:28 AM