I'm just going to admit it right now: Andy was sobbing, the crowd was sobbing, I was totally sobbing.  There was just something so poignant about seeing just how much Murray wanted to do it not only for himself, but for the fans.  And then to see the fans expressing so much gratitude for what he's done already, lifting him up and thanking him for the effort.  We are, indeed, getting closer.

I think it was the second final that Roddick lost to Federer that I didn't eat the rest of the day.  I was just so disappointed I was almost sick to my stomach.  Until later in the evening, and I ate an entire box of Kraft Deluxe macaroni and cheese.  To try and quell the starvation and despair

Times have changed, though, so instead I watched the trophy ceremony with a bowl of strawberries and cream, because that seemed appropriate and a little more healthy, since it was fat-free whipped cream as well.  And for dinner tonight it's another round of spaghetti squash.  Yum!

Then I used my emotions to fuel my most productive Tour de Fleece day yet.  I finished spinning my second single cop, and decided to go ahead and ply my first cop from earlier in the week.  I have no idea if I'm doing it 'right', but I spun the two ends of my center-pull ball together in the opposite direction that I spun.  Then I wrapped that onto a borrowed niddy noddy.  Now it's resting in it's warm bath, because it's just as stressed out as I am after that match: 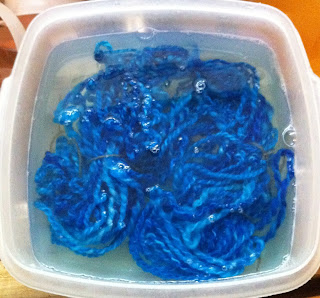 I'm hoping that I've made yarn, but who knows, maybe it will dry and turn out to be a hippopotamus!
Posted by unionjgirl at 2:04 PM