My mind was swirling with ideas for office treats this week.  Brownies, cookies, cupcakes, muffins, pretty much every possibility was on the table, or counter, at some point.  I've been reading a lot of baking blogs, and at this point narrowing things down amongst all of the inspirational deliciousness is the hardest part.

There are a few factors that I consider in making this decision each week.  As I've said before, making it seasonal is always a bonus.  Even if it's just for a weird holiday like World Nutella Day, I like there to be a reason behind whatever it is.  I also like to use something in my pantry that is otherwise just sitting there, and if I don't have to go to the grocery store in order to make it, so much the better, if only for the timing of when I bake versus when I shop.  As I bake more and more, however, my pantry is better and better prepared for taking on random recipes as long as there aren't too many ingredients and they aren't too fancy.  Flour I have, spare vanilla beans, not so much.

In the spirit of using up a jar of apple butter that was in the fridge, I ended up choosing a recipe for Apple Butter Walnut Bars from Sugar Pies.  At first I was hesitant because apples speak more to fall than summer, but then I decided that hey, nothing is more American than apple pie, July 4th was less than a week gone, and two plus two equals I wanted to make these bars.

The basic concept is the same as for most jam bars, I'll probably make several variations in the future, because I have many jars of jam in my fridge.  But for my first time, I followed the recipe as written, with one exception: I substituted the walnuts with Planters Pumpkin Spiced Almonds.  Because I had them in the pantry, another check in the 'use what I already have' box.  They'll likely appear later in the year in something using pumpkin.  Mmm, pumpkin...

Anyway, I followed Buck's directions, baking the crust, then spreading on the apple butter, sprinkling nuts and remaining crumble mixture and baking some more: 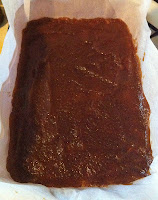 After letting it cool (and cheating just a little by putting it in the fridge for some of that cooling time) I was able to cut them into squares: 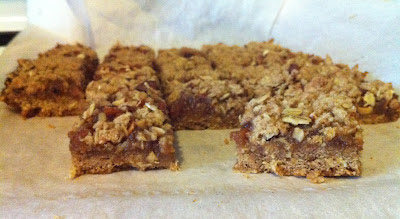 Yum.  I always enjoy licking the batter from the bowl when I'm mixing and scraping the extras from the knife when I'm cutting, and this was no exception.  Gooey, but structurally sound enough to be left on the office kitchenette counter and taken by passersby.  Which is what is happening right now, just a few left waiting to be the bright baked spot in someone's Monday.