Having just decried weight control instant oatmeal, I must admit to having used a ready-made mix that sells itself based on being 'light' for this week's baking adventures.  Behold, in a truly tiny pic:

For me, No Pudge Fudge Brownies were something I wanted to try because:
Okay, so I took this box and followed the instructions like a good little baker.  I mixed the chocolate-y powder with the yogurt until it was a batter (much like any other brownie batter, a bit on the thicker side if anything), poured it into my parchment-lined 8x8 pan, spread it evenly, then baked according to the time and temperature on the box.

One thing I did do, because I'm 99% good little baker, 1% wacky rebel, was add instant coffee.  This particular box of mix was of a Cappuchino variety, so I thought I'd go ahead and give it a helping hand in the caffeine department.  I added a few spoonfuls.  After all, these were destined for a meeting, I wanted to keep everyone perky! 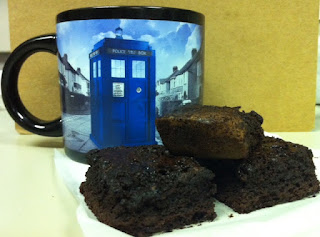 The result was moist, fudgy brownies with a definite coffee kick.  Again, I very much enjoyed eating the bits that stuck to the knife as I cut them into squares.  I've heard that you should be able to use the non-fat yogurt as your only add-in for any old brownie mix, but the one time I tried it, the results were tragic.  I might try it again, but in the meantime, I happen to have gotten an extra box of this mix anyway.  Did I mention they were on sale?
Posted by unionjgirl at 11:17 AM