I made the largest purchase of my life so far this weekend, replacing my laptop.  My poor little MacBook, at 5 years of age, still works fine, but it just missed the cut-off for the move from MobileMe to iCloud, so my hand was forced.  After that kind of spending, I needed some frozen yogurt to calm my nerves, so Dad and I went to the nearest self-serve. 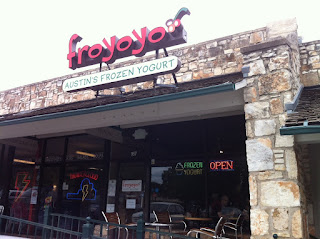 Experience: Ehh.  We were greeted as we walked in, and there were sample cups sitting out, so that was nice (again, I hate being made to feel guilty for sampling).  There's nothing above or below par in terms of service or atmosphere. 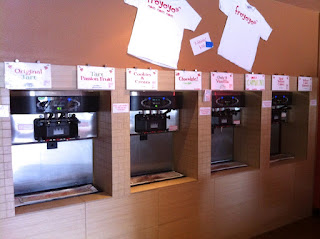 But there aren't a lot of options.  Eight seems like it should be plenty until you're standing in front of them.  And it didn't feel like there were a lot of different kinds of flavors, if that makes sense.  You can be in different flavor moods, and it felt like this was mostly a rich and creamy mood place.  There were two tart options, original and passion fruit.  On the other end, there were two cake-y flavors, red velvet cake and yellow cake batter.  There was also cookies and cream and chocolate.

But it's the two 'Only 8's that would really be my only reason for choosing this place.  Only 8 is basically a diet frozen yogurt that magically only has 8 calories an ounce.  And to be honest, it tastes like it.  It's okay, but it's not as good as the real stuff.  It's something to get when maybe you know you shouldn't have anything but you want something.  I've had it before at another shop, and some flavors are better than others, so far peanut butter has been the best.

The chocolate was pretty good.  I had sampled the passion fruit tart, and it was appropriately tart, just not my preferred fruit flavor.  The red velvet was red velvet, so it wasn't bad, but I was able to resist putting it into my cup.  I ended up with some Only 8 cappuccino swirled with the Only 8 vanilla, and some chocolate.  Then I added fruit, which honestly could have looked a little fresher. 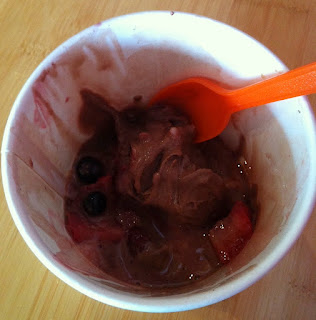 I only remembered halfway through about my journalistic duties, so the photo is a little sad.  Dad also had the chocolate and cappuchino, with chocolate sprinkles.

Worth a revisit?  Technically, this was a revisit, but had their been a more convenient choice available, I probably would have gone there instead.

Posted by unionjgirl at 9:55 AM