Isn't it funny how often the things which are easiest to make are what get the most ooohs and aaaaahs?  This fudge is the easiest thing I think I've brought in, with several different flavor varieties, and each one has been a hit.

The basic recipe for the fudge is almost shamefully easy:
The chocolate and the milk go into a microwave-safe bowl and are melted together.  Carefully.  It only takes a minute or so, stirring at least every 30 seconds, because you don't want to burn the simple deliciousness.  When it's completely melted, stir in the vanilla, then pour into a parchment-lined pan (that you've already prepared because you read this all the way through before attempting, right?) and put in the fridge to firm up.

I originally found this on Sparkpeople through a Google search for easy fudge.  Even the first time I made it, I didn't just do straight milk chocolate and vanilla.  Instead, I did white chocolate with peppermint extract and added crushed candy canes.  Guess what time of year that was?

This time around, I made a berry lemonade version, since it's summertime and I try to keep things a little seasonal.  Weeks and even months fly by when you're spending them in a cubicle, you have to mark the time somehow, you know?  Here are the alterations and additions:
The lemon juice and zest I 'did' myself with four lemons the other day.  There didn't seem much point in keeping the zest and juice separately since anything I planned on adding them to they would both be involved anyway.  So I have a magical citrus elixir for adding to my fudge.  I have to give credit to Dozen Flours for being my proof of concept that I could add the lemon juice and not destroy the chocolate/milk mixture when she posted a recipe for Key Lime Pie Fudge that is delicious.

The reason there are so many different types of dried fruit?  Because that's how many I had in the kitchen.  What can I say, I like to have variety in my fruit stock. 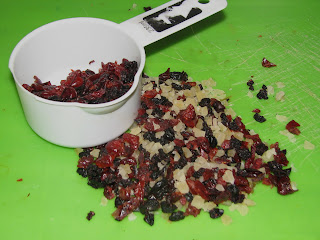 I was worried that I had chopped up more fruit than the fudge would take, but it turned out perfectly.

The instructions are the same: melt chocolate and milk together, then stir in the juice and then the additional goodies.  Pour into pan, spread evenly and count the minutes until you get to enjoy it. 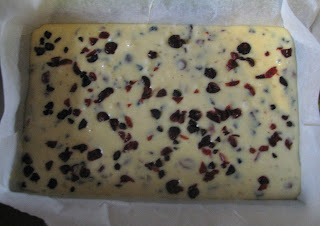 But before you do that, you'll probably want to cut it into squares. 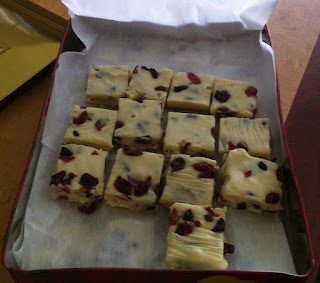 Or not, I won't judge.  But squares are easier for bringing into work and sharing.  My co-workers really loved it, I think the tartness of the lemon cuts the richness of the chocolate so that even people who aren't in the mood to indulge enjoy this.  And those who do like to indulge love it too.  I gave Mom a few pieces to take with her to her knitting group, so it's also crafter-approved.
Posted by unionjgirl at 4:23 PM