Yesterday, I ran in Maudie's Moonlight Margarita 5k, supporting the fabulous hike and bike trail along Lady Bird Lake.  I say this not to tout my athleticism, but to reveal how despite having recently become the kind of person who actually enjoys exercise, I am still very much someone who enjoys eating 'bad' things.  A twit for treats, if you will.

Recently, chocolate milk made headlines for being a good post-work out drink because of the mix of protein, sugars, and magical pain-reducing chocolate.  This was all the justification I needed to bring along a cupcake as my recovery/reward.  After all, if you can't enjoy a cupcake after an evening spent running through the still quite potent Texas summer heat, when can you? 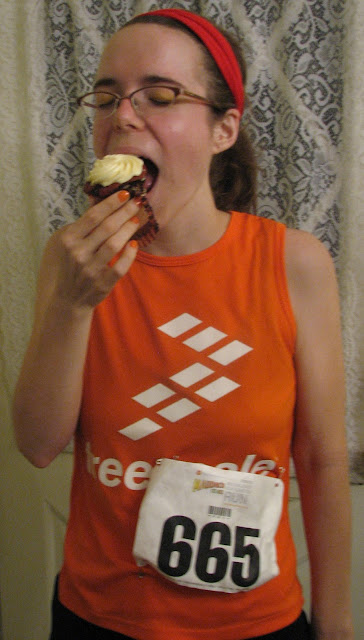 A little background: I have a Groupon problem.  I see a deal, and, well, it's a deal, right?  If I think I can get to wherever the deal is being offered within the time frame, I feel like I should go for it.  Especially when it comes to baked goods.  I love them, and the opportunity to get a dozen cupcakes for half price is just one temptation too many to resist.

The trouble with this way of thinking is that I end up with a dozen cupcakes, and I want to eat each one.  But I count my calories, and twelve cupcakes are not going to get eaten any faster than within twelve days.  It's likely going to be longer than that.  And a fortnight later, those precious baked goods aren't so fresh.  And so I turn to that fabulous modern invention: the freezer.  One or two cupcakes are enjoyed straight from the store, while the rest are lovingly placed in Tupperware and saved for later.

So when I needed a post-5k cupcake, I went to the freezer and dipped into my cupcake stores.  I choose the Triple Stack Trio cupcake from Sweet Indulgence in Grapevine, TX.  I highly recommend this little shop.  Even after freezing, the cake was moist, and the frosting was delicious.  They've recently opened up a new storefront, so I'm clearly not the only one enjoying their work.  This is their signature flavor, I think it's a vanilla, chocolate, and red velvet cake with what I think is a cream cheese frosting.

And it was good. 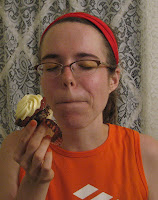 It was very good.
Posted by unionjgirl at 10:06 AM