Before my 5k run on Thursday, I thought a banana would be good fuel for the ride.  But rather than just take the easy way out and eat a banana, I wanted to try baking one.  Why I wanted to make my pre-outdoor-in-a-Texas-summer-run snack warm, I will not attempt to explain.

After a little Google search, I started with Sweet & Saucy's basic directions for baking bananas in their peel.  She did hers with cinnamon, which I love, but I wanted to see how this powdered peanut butter, PB2, would work.  The idea with this stuff is all the fun of peanut butter without the calories.  I like it for putting into oatmeal or other things that I want to taste of peanut butter without actually needing it to be...buttery.

First, I took a banana and surgically opened it up, cutting it almost like an 'I', with one long slit and two smaller cuts at the end so I could actually get in there and cut the banana in half, like so: 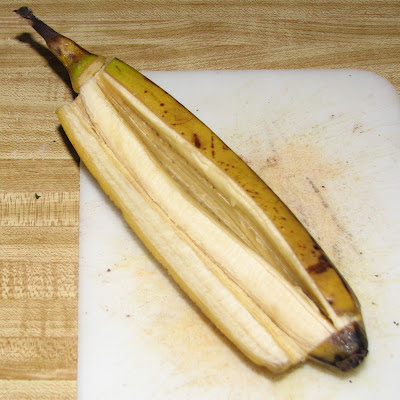 Ignore the slightly sad look of the banana.  I recently learned that not being able to refrigerate bananas is a myth, and that they will be perfectly fine for much longer, the peel will just not look quite as attractive.  I guess the evil banana empire doesn't want us to know about this?

To my banana, I added: 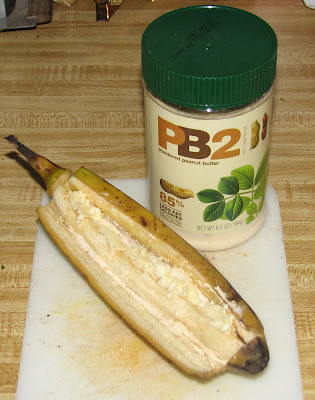 I closed up the banana and wrapped it up in a little pouch of tinfoil.  I set that directly onto the rack in my little countertop oven (an OSTER 6058-000-000 6-Slice Digital Convection Toaster Oven, Stainless Steel), set to 400 F.

Jenny's banana took about ten minutes, but I left mine for more like 15-20.  I think this is because the chilled banana started out colder, so logically it would take them longer to warm up.  Basically, you just want it to be warm and soft.

I put some strawberry jam on top as a finishing touch: 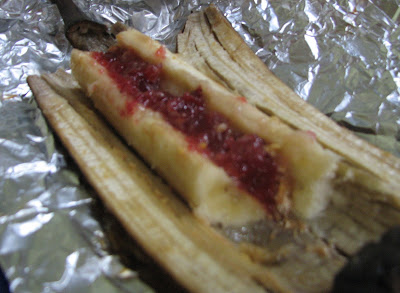 Nostalgic school lunch flavors made my pre-run snack a little more fun.  This could easily be tweaked with other flavors as well.  A little chocolate, perhaps?  I'll be trying a few different combinations in the future.  Also, this would be a great camping dessert to set over the fire, for anyone having a moment of insanity and not making s'mores.  Or perhaps you could stuff the banana with marshmallows and chocolate, with a sprinkling of graham cracker crumbs on top.  Ooh, maybe I need to go camping...(maybe not)
Posted by unionjgirl at 7:30 AM