I draw the line at spinning while actually on a bike

This Saturday marks the beginning of the 99th Le Tour de France, where cyclists from around the world pedal feverishly towards the yellow jersey.  While they do that, I and other crafters will be spinning fiber in solidarity with their efforts.  For the next three weeks, while they scale the Pyrenees, I will be facing my own challenge: to turn myself into a spinner.

In the latter half of last year, I decided that I needed to learn how to spin.  I blame Susan Fricks at Yarnorama for this, because she dyes such gorgeous roving.  You can only write about so many Colorways of the Month for Examiner before you simply have to have some for yourself.  And even though they make wonderful fluffy warm collars just as braids, they really should be made into yarn.

I did my best with a Knit Picks starter set and mass Google search for tutorials.  Unfortunately, I was having issues working the spindle and couldn't get my hands to 'click' with this new motion.  But I didn't want to get a nicer, more expensive spindle until I was good enough to 'deserve' it.  Local woodworker Jeri Brock makes the most beautiful spindles, and she told me that I shouldn't force myself to learn on a spindle I wasn't comfortable with.  Better tools make the task easier.  Thankfully, my mom bought me one  of her Turkish drop spindles for Christmas with squirrels carved into it.

As I've already mentioned, this year's crafting has been all about knitting for others, so I haven't had the time to really force myself into the habit of spinning.  Everyone has said that you just need to keep at it every day and eventually you'll get it.  So while others are going to spin enough yarn for a sweater, my goal is more humble: just spin every day.  For a few minutes, or for an hour, it doesn't matter.  Just keep repeating what feels awkward until it doesn't.

Here's what I'm starting with, my hand-made spindle and hand-dyed roving: 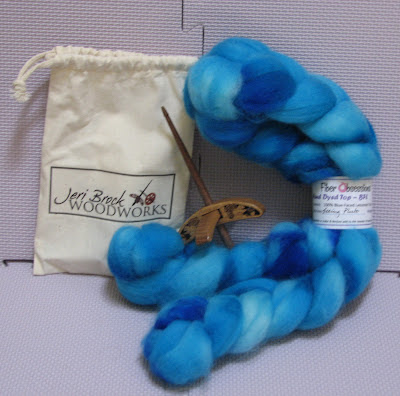 I've already created a leader and gotten a few inches into the spindle, so tomorrow I'll be all set to just start spinning.

And hopefully this tour won't have any horrific crashes.
Posted by unionjgirl at 12:22 PM