Generally, once I get an idea about food into my head, I can't stop thinking about it until I get it into my mouth.  So having already made those oven-baked PB&J bananas, been struck with the possibility of doing it s'mores-style, and bought a bag of marshmallows for entirely other treat-making purposes, there  was no way I wasn't going to try it.

Starting with the same premise as before, I split the banana while still in the peel.  Instead of Brummel and peanut butter powder, though, this one I stuffed with a fun-sized chocolate Hershey's bar all chopped up.

Then I squeezed in a few mini-marshmallows, and popped it into the oven.  I unwrapped it a little for a few minutes near the end, just to let the marshmallows brown a little.  The result? 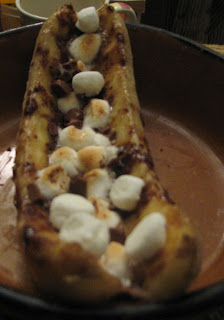 Now tell me that doesn't look good.  I'll tell you: it tasted good.
Posted by unionjgirl at 6:19 PM