You know that super-cool band that everyone seems to know about before you do?  And when you finally do get around to hearing some of their music, your complete and total love of it is ever-so-slightly tinged by the annoyance that you didn't find out about it earlier?  This is how I feel about spaghetti squash.

I know, I know, if you've been reading anything about eating healthy, you've been told about this golden gourd.  I had heard about it to, but I was skeptical that it would really work the way they said.  My first taste of it came from Alamo Drafthouse's Spaghetti Squash Pomodoro, which I had as I watched 'The Best Exotic Marigold Hotel' (a very sweet film, by the way).  I love that they added this to the menu, it means that I can have something other than a salad and actually eat everything that I'm served.  Because no matter how liberally they finish it with olive oil, it's not going to come close to the caloric cost of, say, the Wild at Artichoke Hearts pizza.  I can even eat the side of garlic bread without worrying.  And along with being guilt-free, it was delicious.

Now that I knew that spaghetti squash could be tasty when prepared by the professionals, I wondered if I could do it myself.  My online buddies on Ravelry assured me that it was indeed idiot-proof, so when I spotted it in the grocery store, Mom and I decided to give it a try for dinner, grabbing a jar of pasta sauce to go with it.

First, I attacked the squash with a fork and tried to prick it as I had been instructed.  I didn't get the fork very deep into the rock-hard raw squash, but what I lacked in depth I made up for by making that squash absolutely freckled with tiny holes.  Then it went into the microwave for 2-3 minutes, just to make it a little easier to cut in half, length-wise.  Even so, it was still an absolute beast to break into.  But we got into it eventually, and baked it in the oven at 375 F, cut side down, on a baking sheet with tin foil and non-stick spray.  After an hour, this was what we had: 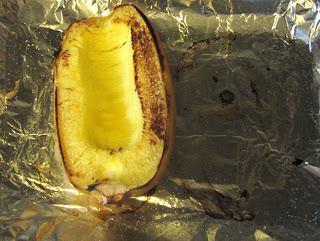 Okay, so it's a baked squash, but would it yield the spaghetti-like strands I was looking for? 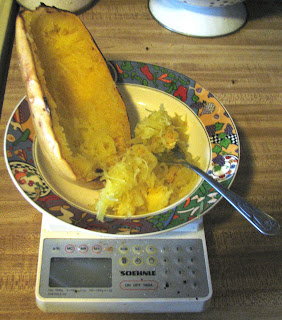 You betcha!  It was the coolest thing to just take my fork and start scraping out these strands of veggie goodness into my bowl.  And I didn't stop until my half was absolutely bare, every 'noodle' freed.  I seasoned it with some salt and powdered garlic, then topped with the aforementioned sauce: 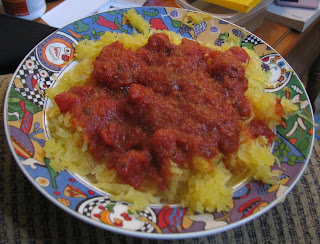 Let me tell you: this was yummy.  No, it's not pasta.  And yes, I'm slightly biased towards vegetables and fruits (it's weird, somehow I found that the more I ate them, the more I liked them).  But this was really, really good.  Now I'm daydreaming about using it for a mac and cheese swap.
Posted by unionjgirl at 2:31 PM