Several years ago, I was lucky enough to visit Olympia, Greece.  It's one of many places I went with my grandparents over summer breaks that I look back on and almost can't believe I was really there.  But sure enough, there is proof: 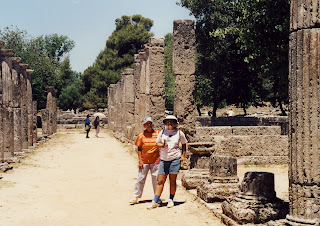 Olympia a beautiful place, and even as ruins, the scale of the Olympic Games is breathtaking.  A celebration of peace and athleticism across an empire that was only just beginning to take shape, but would become perhaps the most influential to ever exist.  The myth that surrounds the Games is continually built upon by athletes who spend their lives working to display their abilities on this one stage.  With so much determination focused on a single idea and goal, it's a unifying force that's hard to deny.

Unfortunately, it's also an opportunity to make money that is far too tempting to exploit.  By reserving the rights to anything vaguely 'Olympic', or any image which involves multiple interlocking circles, Olympic Committees around the world protect a trademark which is indeed precious.  But only because of what giant corporations like McDonald's and Coca-Cola will pay for it.

Yesterday a kerfuffle broke loose in the crafting community because the US Olympic Committee requested that Ravelry rename their Ravelympics event.  Some of you may not know what this is, so I'll try to be brief: it's essentially crafters around the world challenging themselves to complete projects while watching the Olympics.  As athletes compete against each other for international glory and medals, knitters push their skill boundaries for online glory and a little badge to add to their profile.  I want to emphasize that no one 'wins' anything except pride and a sense of community not only with fellow crafters, but with the Olympics.

Aside from the argument of whether or not Ravelympics is a violation of trademark, what has angered so many is the tone of the letter which was sent to those who run Ravelry.  Here's the particular paragraph that sparked my ire:


The USOC is responsible for preserving the Olympic Movement and its ideals within the United States.  Part of that responsibility is to ensure that Olympic trademarks, imagery and terminology are protected and given the appropriate respect.  We believe using the name “Ravelympics” for a competition that involves an afghan marathon, scarf hockey and sweater triathlon, among others, tends to denigrate the true nature of the Olympic Games.  In a sense, it is disrespectful to our country’s finest athletes and fails to recognize or appreciate their hard work.

First of all, as I've already pointed out, it's not really a competition.  It's not a for-profit endeavor, and seeks only to bring crafters together in their participatory viewing of the Games.

Second, 'denigrate'?  'Disrespectful'?  Was that in any way necessary?  No one is saying that these knitters think they are Olympians (although ironically knitting was an event in the first modern Olympics), the idea was to be inspired by their efforts and apply that inspiration to something we love to do.

And let's set the whole idea of 'disrespect' aside.  Because aside from being yet another example of people just not 'getting' what it means to knit, there's a larger trend at work.  They wouldn't care if people were comparing knitting the simplest stockinette scarf to the monumental effort of running a marathon.  If we were paying them for it.  Because selling $5 footlongs don't exactly compare well to the lifelong commitment of amateur athletes either.  What's offensive is not that we are connecting craft to the Games, it's that we aren't paying admission.

There's so much more I could vent about this.  But there would be no point.  Most of you probably already know what I mean.  This is hardly the first time there's been negative press for the aggressive protection of the 'true nature' of the Olympic Games.  These examples of rudeness and greed are constantly standing in the way of our view of the actual event.  Kind of like a tourist who won't step out of the frame of your picture, it gets a little annoying: 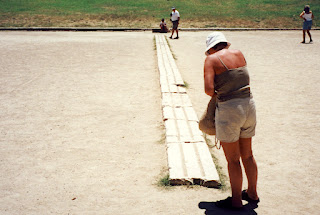 The Olympics has a wealth of goodwill that springs from tradition and the inspiration that the event continues to evoke.  I think that when these kinds of cease and desist requests are made against well-meaning knitters, school field days, long-established cafes, or newspapers in cities called Olympia, they assume that they just have an endless supply of that goodwill to counteract their bullying.  But each step they take, people get closer and closer to a finish line of putting up with an Olympic Games that is one long commercial.
Posted by unionjgirl at 9:42 AM