On my needles: Up for Anything Cami

My year in crafting so far has been dominated by swaps, building packages of goodies to be sent to someone else (while another person does the same for me).  It's been a lot of fun, but I did feel a sense of relief to reach June, the first month of the year that I wasn't signing up, crafting for, or sending a swap.  It's a short break, because I'll be signing up for another in July that will start crafting in August, but I'm hoping to bring my grand total of finished objects for myself to at least two before then with this project.

I am a sucker for colors when it comes to yarn.  The more the merrier, whether tonal, striped, or hand-painted.  It's so pretty, but it can be tough to figure out what to knit out of it.  With so much visual interest already fulfilled by the colors, there's no point in slaving over a complicated lace stitch that you won't be able to see.

This yarn comes from Schmutzerella, one of my favorite indie dyers.  It's from her movie club, inspired by the paint-balling scene in '10 Things I Hate About You'.  She calls it 'Are You Up For It?' and it's on her Schmutzy base, so that's 490 yards for 100 grams in Superwash Merino.  See how pretty?
I had just finished knitting a tunic dress when I was browsing for patterns to use with this yarn, so I suppose I was in the mood for clothing.  I ended up choosing the Razor Cami pattern, which is free on Ravelry.  It's a very simple lace; the pattern is a single page (including photo), which is nice.  Just knit in the round for about a foot and a half and you have a really cute tank top.

I started this a few weeks ago, and so far I'm really pleased with it.  The colors are great, and the stitch gives just enough texture to complement the color without getting lost in it.  And it really is simple.  I've been making sure I get my 10,000 steps a day in on my pedometer by walking back and forth in the living room as I knit this: 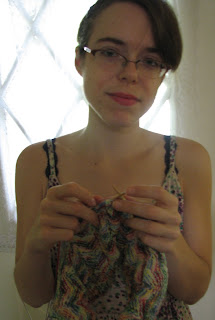 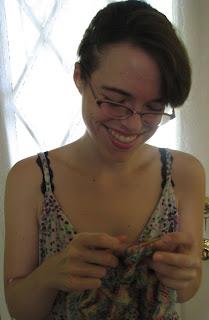 The only thing I will mention for anyone else trying this is that the row with the razor shell pattern ends on a YO.  The way it's written that isn't quite clear, but you are just knitting the stitch pattern and repeating until you have knit the last stitch, and then YO, move over your stitch marker, and start knitting the next round.

Here's my progress so far (along with the project bag Mom managed to snag from Ravelry!): 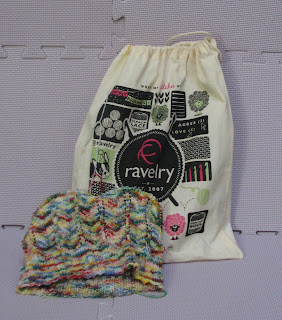 We'll see how far I get before I have to set the needles aside and pick up the spindle for Tour de Fleece!

Posted by unionjgirl at 4:02 PM

Email ThisBlogThis!Share to TwitterShare to FacebookShare to Pinterest
Labels: knitting