Cake balls are so deceptive.  The are composed of some very simple steps, but each of those steps adds up to total a process that I would hesitate to call easy.  I started off so innocently on Saturday morning after breakfast with my box of cake mix, but I ended up working on these on and off almost through dinner.  It's the fridge time that you just can't rush.  Could certainly divide some of the steps among a few evenings after work if you had an office potluck on Friday, and you felt your co-workers deserved it.

And then another layer of deception, because after spending a day baking, mixing, chilling, rolling, chilling, dipping, sprinkling, and chilling some more, I took a look at my cake balls and thought they looked kind of ugly.

Okay, so they don't look so bad in the photo.  But they're a little big, and surrounded by the dirty bowls and with my hands covered in batter and chocolate, they looked a little more sloppy than perhaps I had imagined in the beginning.  But then, I have a tendency to imagine cookbook-type photo shoots.  And that rarely happens.

And, of course, no one really cares whether it looks like a truffle in a Parisian chocolatier's window or a truffle in the dirt waiting to be sniffed out by an intrepid pig.  They just see chocolate, frosting, and cake goodness.  I ended up with enough 'inventory' for three separate deliveries of cake balls this week.  On Monday, 16 cake balls disappeared within two hours of being left out.  That may well be a record.  And today, the third and final day, they disappeared at almost the same rate.  Plus, I also had several in-person visits to my desk to berate/thank/congratulate me on such a tempting treat.

There are lots of possible combinations, between the cake, frosting, and chocolate coating.  But I think I'll give myself a little break from this 'easy' treat for at least a week or two.  Besides, my co-workers would probably prefer something at least pretending to be healthier next week. 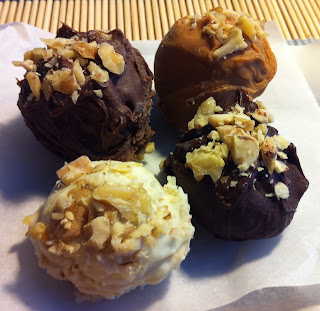 Posted by unionjgirl at 6:11 PM