I know there are people out there for whom 'semi-homemade' is a four-letter word.  Everything should come out of the oven made from scratch.  And that is a wonderful thing.  It's a thing I aspire to.  But it's not realistic for me.  And as oxymoronic as it might be, my latest foray into semi-homemade was actually a kind of a milestone for my baking confidence.

Knitting and baking are very similar.  A pattern, a recipe.  Yarn, ingredients.  A shawl, a cupcake.  When I started knitting, a pattern was like a mandate from God.  If I wasn't using exactly the same yarn as the designer, I wanted one with exactly the same yardage per gram.  And of course, the same needle size.  But now...well, now I'm knitting a shawl for a swap with no pattern at all.

So when I had some dried banana chips that were on clearance because they had been crushed slightly, and a box of Ghiradelli chocolate chip cookie mix just sitting around, I decided to improvise a little.  The mix called for an egg and a stick of butter.  I had the butter, but I didn't feel like taking it out of the freezer to get down to room temperature.

I decided instead to try out a substitute.  But I was still a little unsure about betting entirely on any one option.  So, instead of a stick of butter, I mixed in, along with an egg and the pieces of dried banana chips:


The mashed banana made sense given my starting point of the banana chips, and peanut butter should really make an appearance at any party with chocolate and banana.  The spread was just in there for good measure.

And then, things got really wild.  Instead of dropping tablespoons of the dough onto a baking sheet, I dropped them into mini-muffin tins that I had sprayed with non-stick baking spray.  They went into the oven at the temperature specified on the box for about the same amount of time.  It made an even 30.

My biggest fear was that they would get stuck in the pans, but thankfully my prayers I whispered over the trays as I popped the little bites out were answered: 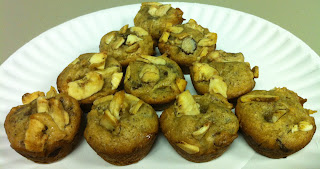 Lovely.  Golden brown on the outside, but still soft in the middle.  Neither the banana or the peanut butter took over, but you could tell they were there.  These were so good, that after trying one while at work, I took another one to come back home with me for dessert.

Basically, things made in a mini-muffin tin are like shawls: always a good idea, whether you're following a recipe or making it up as you go along.
Posted by unionjgirl at 4:06 PM