You might think that this week's office treat was sort of an afterthought.  After all, I've already made pineapple marshmallows, and this batch was really made for swapping purposes, I just happened to have enough left over to bring in.  But really, I thought quite a bit about what to make this past week, and had every intention of making some sort of fudge, or perhaps cookies.

The thing is, I didn't just make marshmallows for a swap.  No, these were marshmallows with a higher purpose than most.  Because these marshmallows became Peeps.  And not just any Peeps.  Kitty Peeps. 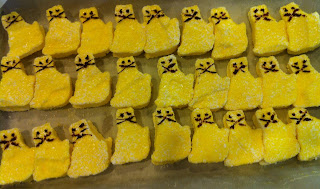 Aren't they cute?  I think they are best photographed in groups, because I fear that if you just look at one, you might not realize that they are cats.  But I'm pretty proud of these, that this random concept I had to tie in with my swapping spoilee's favorite color worked out.  If you can't tell, it was yellow.  She even described it as 'Peep yellow' in response to my assertion that I loved 'Peep pink'.  So I thought it was appropriate.

Having whipped up the marshmallow, waited for it to set in the pan, sprinkled with yellow sugar, cut out with a cookie cutter and used a toothpick to decorate with melted dark chocolate, I still wasn't done making treats to send away.  Because while my spoiler liked Peeps in taste as well as color, she liked banana yellow but hated the actual fruit.  So to have a little fun, I decided to send her some 'ironic bananas' made of marzipan. 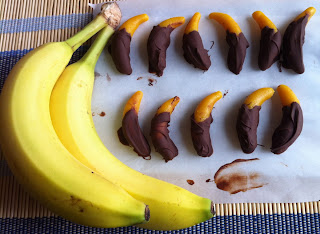 These are easy to make, just take some marzipan/almond paste, and work in some food coloring.  Then take a piece, roll it into a banana shape, and set on parchment paper.  I let these sit in the fridge for a little while, then melted up some dark chocolate and gave them a dip.  Back onto the parchment paper and into the fridge.

After all this, I thought that making yet another sweet treat was likely a bit much, even for me.  So when just half of the marshmallow made 27 Peeps, I deemed that as plenty and cut the rest into cubes for work.  Physically unable to bring in the same thing twice, however, I knew I had to do something else.  And when in doubt, dip in chocolate, right? 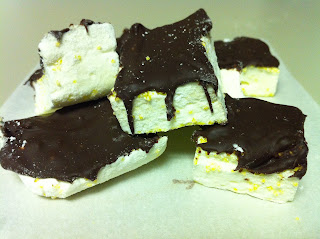 Everyone at work seemed to agree.  If only I had had some flaked coconut, I would have added that, but that's because I just can't stop myself.
Posted by unionjgirl at 8:15 AM