When conceiving of last week's baked good, I was in a celebratory mood, due to that work milestone I wrote about reaching.  If I could break through months of delays and finally reach this finish line, I could do anything.  Souffles!  Okay, maybe not.  'Real' bread!  Maybe, but I didn't really want to make bread.  Biscotti!  Yes!  Tasty, something I haven't tried before and with an added layer of complexity (being baked twice) while still being within the realm of the rational.

Any experienced/jaded member of the working population knows that crossing the finish line usually means that there are still a few hidden hurdles left to go.  So by the time I got to the actual baking of my first biscotti, I wanted to make it as easy on myself as possible and use a recipe I had found using a cake mix. And I don't know about you, but when I think of celebrating, I think of sprinkles.  So I grabbed a box of Funfetti cake mix instead of my usual favorite red velvet as the original recipe used.

I feel like I've reached a tipping point and learning a lot of lessons about working life at this two-year mark.  One important one was given to me by a co-worker as we discussed having a launch party with cake for this milestone: when something good happens in work, you should celebrate, because the moment will pass quickly and if you miss it, you will regret it later.  So if you have a victory in your little cubicle, hurry up and bake these biscotti before something else pops into your inbox! 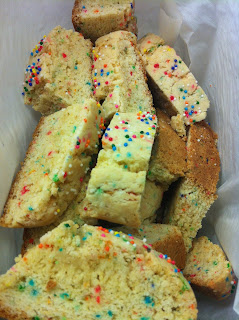 Recipe from Something Swanky

My Notes:
Posted by unionjgirl at 2:45 PM