For my manager's birthday, I decided to make something tasty.  But not a cake with candles for blowing out.  Not as obviously celebratory, but just as delicious.

The first thing I knew was that it would have to be fudge, because those are always the treats that make her come by my cube and declare it the 'best thing ever'.  And based on one of her favorite beverages, I wanted to try a new technique with my tried and true fudge recipe that I've been thinking about for a while.

That twist is chai tea.  Getting chai flavor into fudge poses some challenges.  Generally, to get tea flavor into something, you could steep some strong brew and add that in place of some of the liquid, but the closest thing to liquid is sweetened condensed milk, and I don't even want to imagine the sticky mess that would result from putting a tea bag into that ooey gooey stuff.

And so, I took the simplest fudge recipe ever...and complicated it.  But it was totally worth it.  What I did was, I made my own sweetened condensed milk.  After all, it's just milk and sugar, reduced down.  And chai is sometimes steeped in milk rather than water.  So why not?  Sure, it takes an extra hour or so to put it together, but it's not actually that much more difficult.  And it's flexible enough to work with all kind of other flavors, so I'm excited to have expanded my fudge possibilities. 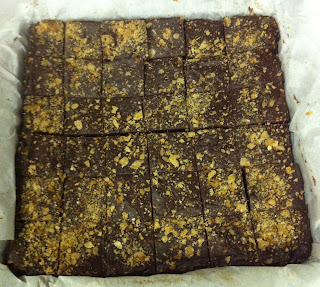 Dark Chocolate Chai Fudge
(Using an adaption of Foodie Fiasco's Homemade Sweetened Condensed Milk)
Makes a pan (depending on how thick you want the squares, the pan can be smaller or bigger)

* You can use whatever milk, dairy or non-dairy, you like.  I used half fat-free milk and half Unsweetened Almond Breeze Coconut Almond Milk

Additional:  I also sprinkled on brown sugar crumbs I saved when I made my Sugar and Spice Nuts.
Posted by unionjgirl at 5:25 PM