When life gives you lemons, make lemonade.  Or maybe lemon curd.  And certainly don't waste any of that delicious zest.  Anyway, you get the idea.  One of my favorite things about baking is taking something that I just happen to have on hand and using it in a delicious way.  Especially if that something might otherwise go to waste.

I already wrote about my adventures in turning accidentally non-diet soda into root beer syrup.  I finally found a baked good that seemed to be the right fit for using this delicious nectar of the junk food gods.  I wanted something which would take advantage of the flavor, but I also wanted a certain amount of safety in the recipe.  For instance, I didn't want to substitute sugar for my syrup and worry about the additional moisture as well as the syrup itself.  So simple was undoubtedly going to be best, nothing to mask the flavor or add the possibility for failure.

I decided that my root beer syrup was basically the consistency of corn syrup, and that's pretty much what soda is after you remove the water and carbonation.  There are a few recipes written especially for corn syrup, but of course companies that sell corn syrup tended to be the largest resource.  I've flagged a few more for future use because I still have some syrup to spare (I reduced quite a few cans, after all), but this was a good starting point.  Anything with cream cheese is a good starting point.

In the end, the root beer flavor was very subtle.  I might want to invest in a little root beer extract to boost that in future baked goods.  But it did impart all the necessary sweetness and a little bit of additional flavor.  Almost spicy, but not, if you know what I mean.  I also considered drizzling some more syrup on top, but that would have made transporting them as precut squares an even stickier situation.  As it was, these were delicious, gooey cream cheese squares with a great story to go along with them about how they were made with soda. 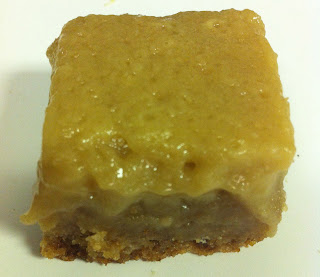