Okay, it's time for you blog readers to unwrap my Christmas knitting, now that the recipients have.

First, I had two projects that had a deadline earlier than Christmas Eve, because I had to ship them off to the UK for my grandparents.  I knew as soon as I saw this pattern for a fox scarf, I thought of my grandmother.  For years now, they've had a fox come visit in the evening for whom they have left a small plate of food, either dog food or some dinner leftovers.  So I thought this would make a perfect scarf just for draping over her chair in the living room to have on hand when there was an extra chill.  I used Cascade 220 in a deep rust color, and I love how it turned out.

And then, I whipped up a beanie hat that I thought would be useful for keeping my grandfather's head warm on wintery walks.  The pattern was easy to follow, and I really like the texture it created and how all of the colors mixed together.

I think my favorite thing about these knits is that they are both inspired by happy times I have spent with them, going for walks to feed the squirrels in Nonsuch Park and keeping a lookout for the fox in the garden before going to bed.

For those giftees who live in Texas, however, there is less need for knitwear.  So I had to get a little more creative.  Even if people don't need them, their stuff probably does, right?  So I made a Kindle cozy using this cable-rific pattern.

I feel like, because it's a relatively small project, I wanted to up the ante with some cables, which I haven't done too many of.  I love the effect, but I generally find the action of putting stitches onto the cable needles, knitting, and then knitting from the cable needles, a little fiddly.  But after a while I got used to it, and it's even a little easier to 'see' the pattern than with some lace patterns, which is nice.

Also, this was the project that I mentioned as using the magic loop technique.  I liked it, it reduced the fiddle-factor that I would have had using DPNs (plus cables, it would have been more needles than I really want to handle at once).  On a scale of skill, it's still something that I can just read by rote.  That is, I can read the directions, or watch the YouTube videos, and follow along.  But I don't necessarily understand the mechanics of it.  I'll  probably try, though, just to be able to use it for mitts and hats.  And possibly for venturing into the brave new world of socks...

Anyway, the final gift I have to share wasn't knit at all.  Rather, it was sewn.  My dad is always picking up these simple, small drawstring bags when he's in Tokyo.  He wasn't able to find that many on our last trip, so I thought that this might perhaps be the elusive present that combines practicality and personalization.

So with the sewing skills of my mom, and some train fabric I found at Joann Fabrics, he got his own special set. 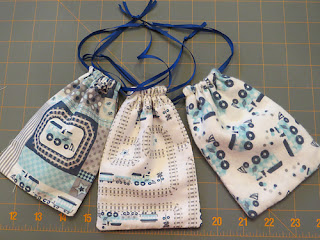 I must admit, I still have one Christmas present out pending.  I'm spinning some yarn for my mom, and all I was able to present her with was one completed cop.  But at least now that I've revealed that it is for her, she can let me know how she wants it plied, etc.

Whew, I feel so much better, now that I'm not keeping crafting secrets from you all!
Posted by unionjgirl at 3:25 PM