I get Groupons for five cities.  Because aside from Austin, there's always the possibility that I might use a deal somewhere like Dallas or Houston on a trip for whatever reason.  And we're in San Antonio every few months it seems for some fiber event or other.  So it's worth scanning through the deals in my inbox just to see if there are any deals I take advantage of before they expire.

That's why instead of making our usual stop at Chill Out, we deviated and stopped here during a day trip that also saw us visiting the ripped-from-the-brink-of-closing Yarn Barn and most of the Missions.  A Groupon is a great excuse to check out something new, because you never know when you'll stumble upon a new favorite. 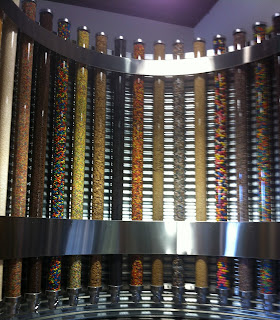 When I visited: Friday, December 28th, around noon

Experience: Yet again, it appears that controlled sampling is becoming a trend.  And yet again, though I dislike it, I  give a little more leeway here than I do to Orange Leaf because the woman who served us (who may well have been the franchise owner herself) was very friendly and prompted us to try as many flavors as we would like.  I still prefer to swirl my own samples, but at least here it felt more like she was helping, offering suggestions on which flavors were new, which she liked especially, which might make good combinations, etc. as opposed to begrudgingly controlling our greedy messiness.  It will make me wary, though, if I ever find another location, because if this is a corporate policy, I'd rather avoid it.

I ended up trying five of the flavors: Cappuccino, Cupcake Batter, Pecan Praline, Greek Lemon, and Blueberry.  Cupcake Batter was good enough, but I was really impressed with Cappuchino and even more especially Pecan Praline.  I've had the latter several times, and up until now it was a disappointment.  But this was pretty perfectly creamy and nutty.  Perhaps a little more praline caramel-ness would take it over the top, but this was without a doubt the best version of this flavor I've had so far.  And the Cappuccino, aside from having a good coffee flavor, was also creamy, reminding me of the foam of a true cappuccino.

The Greek Lemon was good, and apparently has the added bonus of protein from being Greek yogurt.  It could have had more lemon to bring out the Greek tang, but it again, it was good, as was the Blueberry, which was no sugar added as well.  I chose these two for my bowl, along with the Mango Tango Sorbet and a little of the Original Tart. 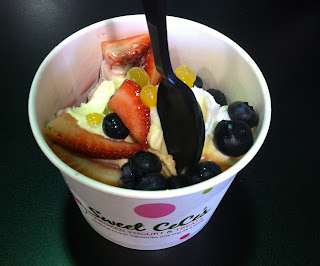 The dry toppings are displayed in particularly cool way, as you can see in the first photo.  And there was some no sugar added chocolate fudge topping, which I appreciated, though I didn't take advantage of this time.  I do wish there had been more fresh fruit than just strawberries and blueberries, but it is winter, so keeping it fresh limits the choices.  They use real yogurt here rather than powder mixes, and you can tell.  Creamy is the best way to describe it.  I think overall the flavor could be turned up a little more, certainly the fruity ones could be stronger for my personal tastes.

Worth a revisit?  Chill Out still wins out for me for their excellent flavors (and the ability to self-sample), but for those trips when we are just skimming the outskirts of San Antonio on the way to Boerne or Comfort, this is a convenient stop right off of 1604, so we'll probably come again.
Posted by unionjgirl at 5:54 PM