The company I work for has locations around the world, so I have teammates across the country and the globe.  The disadvantage for those whose cube do not dwell in the same office as mine is that they can't taste my treats.  I'm working on this, but in the meantime, one of my colleagues has figured out how to get involved on the front end.  He works in Arizona, but he's visited a few times.  On one such visit, he mentioned having made some habanero pepper orange marmalade.  This drew oohs and aahs from myself and others.  For the holiday season, he sent us a few jars.  Savory Santa!

I knew instantly that my jar was going to be 'paid forward' in the form of treats, the question was in what form.  The heat from the habanero had me leaning in a decidedly savory direction, especially because the serving suggestions were to glaze meat, or spread sparingly on toast.  I didn't want to try and make orange cupcakes with a cream cheese frosting and then throw it of by hiding a spoonful of this inside.

I liked the simplicity of this recipe, with just a handful of ingredients, I was sure that I wouldn't have colliding flavors.  I made my own addition of some cornmeal because I feel like corn and heat in baked goods is a natural combination.

There's more marmalade in the jar (and more cornmeal in the bag), so I'll be trying out more savory treats in the weeks to come.  Maybe a marmalade-swirled bread?  I am open to suggestions. 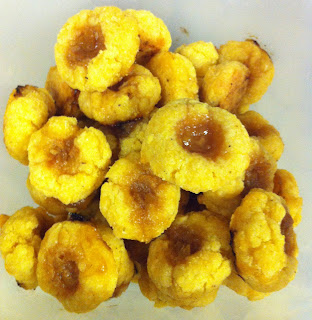 Posted by unionjgirl at 4:52 PM