We found frozen yogurt in Katy and Houston, so of course we also had to stop by the new place in Bastrop that I had found out about earlier this year.  I couldn't justify squeezing in a visit while on the way to Yarnorama for the holiday party, but as the final stop before finally heading home, it was perfect. 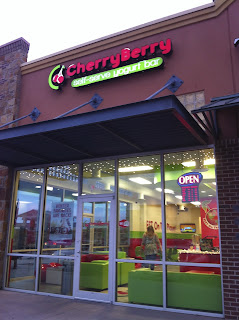 
When I visited: Saturday, December 22nd, around 5 pm

Experience: There was a good blend of cute and cozy here, with the bright colors that seem to be a requirement for frozen yogurt and some comfy seats and the television tuned to a football game, as it always should be in Texas.

And as we sampled down the line, it only got better.  There were two sorbets, which is always a bonus, especially because one was Watermelon, and even though it was tasty, it's not a flavor Mom likes.  So having Pink Lemonade there as well was good, and even more so because that was a really good, pucker-worthy Pink Lemonade.  I also really liked the Red Velvet, so that made it into my bowl along with some Strawberry and the Pink Lemonade.  Mom just got Pink Lemonade.  Ever notice how much prettier her bowls look than mine?  She has great swirling technique. 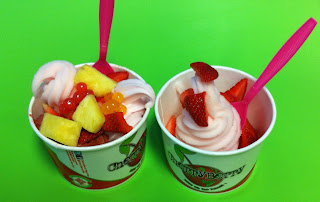 The other flavor we both thought was really good was the Chocolate.  It tasted like chocolate rather than chocolate flavor, if that makes any sense.  The White Chocolate Wonder was good, not as amazing as the regular Chocolate, but usually it tastes so artificial that it's worth noting that it was okay.  I almost got some of the Birthday Cake, just because it was such a nostalgic flavor, and the Peanut Butter swirled with the Chocolate was perfectly Reese's.  The only real disappointment was the Salted Caramel Pretzel, which, as you might be able to guess, was too salty.

Because I actually took note of all of the flavors available this time, here's the list: Cookie Monster, Spiced Apple Pie, Cheesecake, Vanilla, and S'Mores.  All of these were good and depending on my mood might have been included in my bowl.

Worth a revisit? Definitely, I got one of their rewards cards and will probably stop by whenever we come to Bastrop.  And I'm researching locations in Austin to try soon as well.
Posted by unionjgirl at 6:05 PM