I felt that I had two directions I could take with this, the first baked treat of the new year.  I could embrace the well-intentioned resolutions of my co-workers and offer up something relatively healthy, maybe using oatmeal and some dried fruit.  Or I could viciously present them with temptation straight out of the gate and go for something deliciously bad for them.

I can only hope they will forgive me.

I got this mix a month or so ago:

I figured that black velvet was sort of like black-eyed peas, and thus was doubly appropriate for this time of year.  Along with the cake mix, it comes with a packet of 'European-style buttercream' frosting mix.  I didn't feel like messing with the actual frosting of cupcakes or dealing with transporting them without messing up said frosting, so I decided to make cookies, which could then be sandwiched with frosting.  I found this recipe from Duncan Hines for making cookies with cake mix, and because my mix called for the same add-ins to create regular cake as DH, I deduced that this would work for cookies as well.

Not content with that, however, I then also decided that this would be a good opportunity to use up some ice cream by employing the melted ice cream cake technique I've used before.  It really does result in beautifully moist cake.  And when it ends up finishing off a half-eaten pint, it also results in a little more room in the freezer, which is even better. 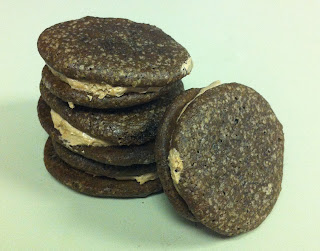 Frosting (I only used about 2/3 of the resulting frosting in the sandwiches):
Directions:
A note on the ice cream: You can choose whatever flavor you like, but generally I like to try and make it compatible with the cake flavor.  I used Strawberry this time around because I had a premium pint of it and decided that I was more in the mood for berries than the mix of Bananas Foster and Spiced Pumpkin that I also had available.  The flavor was subtle, but there.  You can also use a 'light' ice cream, in which case it's even more important to measure after melting, because there's more air whipped into slow-churned varieties.
Posted by unionjgirl at 3:12 PM