Having tested the strength of my co-workers' resolutions enough for the time being, I thought I would give them a break this week with a treat that is actually pretty good for them.  Of course, that still doesn't make it a diet-friendly snack, but it is a treat with a lot of redeeming nutritional value.

Last week, I raided my candy stash for cookies.  This week, I took a look at all of the dried fruit that I had, and thought that mixing those together would be a good idea.  And then, when I gave blood, trail mix was one of the offerings on the recuperation table.  I brought my own apple to boost my sugar levels, so instead I pocketed a bag of mix to add in.  A few additional nuts, and I had plenty of trail mix to bake into something.  I had already done cookies, and these were likely too heavy to incorporate easily into a cake, so brownies made sense.  But I wanted to make this a chocolate-free treat (just for the sake of it), so blondies it was.

I started off with a recipe from Little Bitty Bakes, but switched up a few things to make it even easier to convince my co-workers that they could justify eating a piece or two.  I replaced some of the butter with mashed banana, which I have on hand in my freezer anyway.  Whenever I get bananas, I tend to get a few extra than I think I'll eat fresh, then chop the rest up and freeze for just such an occasion.  I also substituted honey for some of the white sugar, because I like the flavor, and it made sense with my trail mix theme.  I could almost imagine justifying them as a breakfast item.  It's certainly no sweeter than, say, a strawberry danish or something.  And much better for you overall.

Another successful treat, the first 20 were gone by around lunch, and the next 20 were shared between our group's coffee meet-up and another office area where I dropped off the leftovers.  Spreading the wealth, you might say.  Or cultivating cross-team cooperation, if you want business-speak. 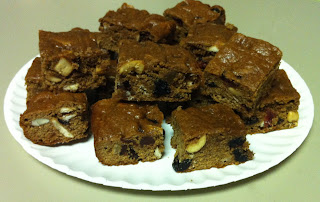 Directions:
Posted by unionjgirl at 10:08 AM