For all of the frozen yogurt places popping up everywhere, it's still amazingly easy to find myself not passing one without making a concerted effort.  Super-South Austin is sorely lacking in frozen yogurt.  But for those truly dedicated to enjoying some, there are a few options.  Last weekend, Mom and I decided it was worth going a little out of our way to try this out.  Well, for her to try it out, I had been once before almost a year ago with co-workers for 'dessert' after having lunch at Kerbey Lane. 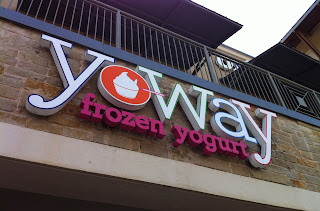 When I visited: Saturday, August 18th, around 2 pm

Experience: Busy busy!  Families were clearly celebrating the upcoming start of the school year with one last froyo fling.  Sample cups were sitting on the counter, ready to go, which is nice because it means that even if the cashier is busy weighing someone else's swirl of yogurt, you can still start sampling right away. 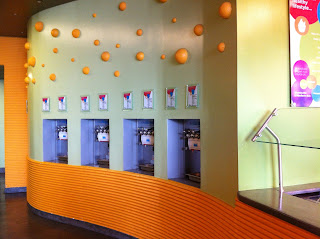 At first I was worried that there wasn't a sorbet option for Mom, because the first four cubbies of flavors were all dairy, but there was a fifth hiding around the bend on the left in the photo with some Key Lime.  Score!  It also had Coconut, which I love.  The Strawberry we both agreed was alright, but not as good as the tart varieties at The Yogurt Spot or Chill Out.  The Cheesecake was good as well, and I really liked the Thin Mint, had a great balance of chocolate and mint.

In the end, we both went for the Key Lime, and I went ahead and added a little Coconut and Strawberry.  Plus fruit for both of us.  One thing I really appreciated: the pieces of kiwi were cut to a bite size.  A few other places have left them in chunks slightly too big, and a plastic spoon is really not a tool for cutting that chunk into two. 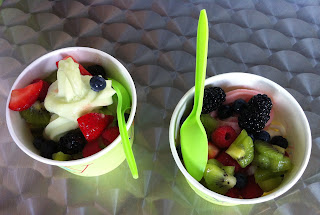 We ended up standing outside to eat our yummies because all of the tables inside were taken, and the chairs for this table had been purloined by another family.  But I preferred being outside to being a little too cold inside, and since it had just rained it was cooler than usual, and the frozen yogurt kept us refreshed as well.

Worth a revisit?  Yes, this is a great option for those who are further south but still want their froyo.  If, say, Yogurtland was just as close, I would probably go there before going here, but rather than driving an extra dozen miles each way, this is a very solid entry into the South Austin froyo market.
Posted by unionjgirl at 3:28 PM