Small things are cute.  Kittens, gnomes, Polly Pockets, they all owe at least part of their awesomeness to their size.  And so the only thing better than cupcakes are...mini cupcakes!  Or in this case, mini muffins.  I still have jars and jars of jam just waiting to be added to my baked goods.  They've topped cookies and been spread over bars, so next up I thought a filling in a muffin would be nice.

I used this recipe as my starting point, and as I was mixing it up, I could definitely tell that this was a muffin rather than a cake mix, much more doughy.  An interesting aspect of this recipe is that you literally mix all of the wet ingredients, then add the dry.  No creaming the butter and sugar together.  I did substitute dried orange zest for the lemon, because that's what I had in my pantry from Penzey's.

I should also admit to having been a bit of a lazy baker this time around.  I didn't sift my dry ingredients together before mixing into the wet.  And I didn't so much spoon the jam into a well of batter as spoon it onto the top as best I could, and try to cover it completely with the remaining batter.  The resulting muffins are thus not as perfectly pretty, and the jam did escape a little in some cases, but I cavalierly decided that that didn't matter.  The more confident I get as I bake, the less fearful I am of slight deviations from the plan.  As long as they were muffins and they had jam, that was the goal.

Muffins are always skirting the edges of breakfast versus dessert.  I decided to push this even further by glazing them.  I took the powdered sugar which was spiked with green sprinkles for rolling the pineapple marshmallows of last week and some orange juice and just drizzled this on top.  The result is probably a slightly puzzling green glaze that might imply some sort of basil action going on.  But no, it's just orangey. 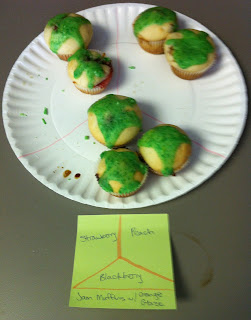 I think the way I presented these muffins in the the kitchen area might reveal more about myself than I intend.  Namely, how working in documentation means that I can't just leave muffins of varying flavors without including some sort of diagram in order to guide potential eaters to the jam of their choice.  I just had to partition the plate into thirds, place each variety in its own section, and then mirror this organization on a Post-it which labels each muffin as either Peach, Strawberry, or Blackberry.  With, of course, an over-arching description that these are muffins with an orange glaze.  Information is power, people!  And delicious, information is also delicious.
Posted by unionjgirl at 6:02 PM