It's an annoying question that knitters hear a lot: 'You know you can just buy those in a store, right?'  Yes, we are all aware of the modern convenience of walking into a place of business and purchasing from their stock something which is merely a shadow of the awesomeness of the handmade crafting we are doing.  Thank you.

Self-righteousness aside, even the things that you almost always buy from the store can be made extra special by, well, making them yourself.  Marshmallows so fall into this category.  Easily picked up at the grocery store to be enjoyed in s'mores, sweet potato casseroles, or baked banana desserts, marshmallows are a magical cloud of sugar and air.

Perhaps it's that airy quality that makes them a little intimidating for someone like me, who consider themselves enthusiastic treats-makers, but not necessarily expert in the finer points.  Like the ever-scary soufflé, I had a dread that somehow rather than creating something light and fluffy, my adventurous attempt would end in deflated tragedy.  But I can proudly state that fluff glory was mine.

Even though these are homemade, there's still a little 'cheating' involved.  Namely, rather than using Alton Brown's recipe, I instead tried this one from someone on Bukisa that uses Jello flavored gelatin as well as a little additional unflavored gelatin, some corn syrup, sugar and water.  The best part?  No candy thermometer!  Something about that made me feel more confident about my ability to execute this recipe successfully.

I followed the directions, heating just long enough to dissolve everything together, then chilling for, say, 30 minutes before whipping out the electric hand mixer.  And magically, the translucent yellow goo became a white foam which eventually formed soft peaks.  And after a few hours chilling in a pan in the fridge, they cut into cubes pretty easily to be coated in powdered sugar.  Since I was doing pineapple marshmallows, I added some yellow and green sprinkles in there as well.

See how tropical and pretty? 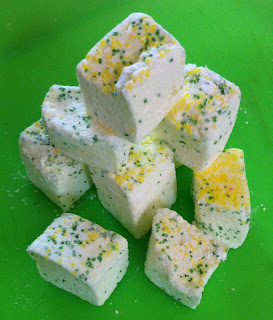 Let me tell you, homemade marshmallows are so much softer, fluffier, and just all around tastier than the ones that come out of a bag.  My mind is racing with the possibilities.  Crazy-awesome s'mores, cupcakes with a marshmallow frosting, the most extremely decadent hot cocoa ever.  And did you know, they make cranberry Jello?  It's going to be a good fall...
Posted by unionjgirl at 12:03 PM