After massively restocking in Fredericksburg, I've been keeping my eye out for recipes that use my new yummy jams.  One of the classics is thumbprint cookies, simple sugar cookies with little wells for jam or other spreads.  This recipe from Two Peas & Their Pod struck me with it's simplicity.  I mean, four ingredients?  Sign me up!

One thing to note is that this recipe calls for the jam to be added after baking.  I liked this because I wanted to bake the cookies a day before I actually served them, and I didn't want the jam to soften the cookies in the meantime.  I could probably have done the same thing with any other recipe, but since this one told me to, all the better.

I got the dough together, but I really wouldn't call it a dough, because it was so super-crumbly.  I thought I must have done something wrong, but I powered through even though I couldn't quite turn them into the 1-inch balls with thumbprints because they were falling apart.  I just tried to get them as close to the intended shape as possible, slipped them into the oven and crossed my fingers.

Thirteen minutes later, I did, in fact, have cookies.  I wasn't entirely confident in their ability to act as conveyors of jam.  So when I did top them with jam, I did anyway with any notion that the jam would be contained.  Instead, I took my peach blossom jam, a few tablespoons, and mixed in just a little water in a mug, then heated it in the microwave until it was more like a glaze.  I spooned that over the cookies and let the sugary goodness drip over the sides through the deeper cracks of the cookies.

Here's how they looked as I took them to the Ravellenics cast-on/Olympics opening ceremony viewing party: 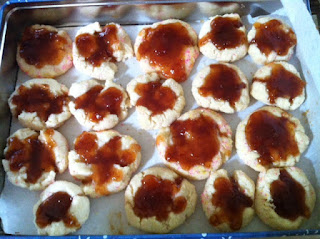 Probably not the prettiest cookies, and I won't lie, I was worried that I'd still have 18 of them at the end of the night.  But no, just two remained (so I got to try one - yummy!), and I was even asked for the recipe.  Just goes to show you, even when you think something has gone wrong, it can still be right.  And tasty.
Posted by unionjgirl at 4:07 PM