Are you ready for some...tennis?!

Yes, yes, I know that football is coming.  And I'm excited, sure I am.  I have become one of the legion of Americans waiting to see if the officials will come back from their lockout, how Peyton will play for the Broncos, and how long it will take for it to be Tebow time in New York.

But right now, what's important is an Olympian still seeking a grand slam gold, a missing Rafa, and an ever-more-obvious lack of roof.  That's right, it's the US Open.  As the commercials say, it must be love.  No matter how deeply I am pulled into the mainstream sports, my ultimate loyalties will always be to the slightly more indie game which has been with me from the start.

If football is a high school jock, what is tennis?  Maybe the preppy nice girl.  I don't know, I'm still distracted by the fact that the school year is just starting here.  Forgive me, I'm a student for life.  Seriously, if I could make a living taking classes, that's what I'd do.  Preferably at Sarah Lawrence.

And if I did that, I'd go to the US Open every year.  I went once, and got to see Berdych, Federer, and Roddick play, and Murray on the practice courts.  Got Tommy Robredo's autograph as well.  Unfortunately, it didn't give him luck enough to win, but I still cherish it.  Here's an action shot of Roddick from then: 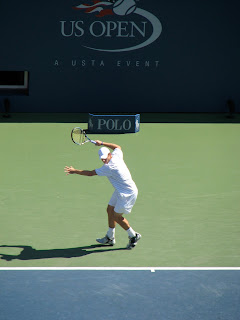 I'll be following Andy with ever-escalating hopes, as well as the rest of the players, for the next two weeks.  Hopefully this morning's deluge of rain will be the last we see until the winners have safely raised their trophies.  Because as amusing as it is to see Tom Rinaldi standing in the middle of Arthur Ashe in full flood regalia, I'd rather be watching match play.
Posted by unionjgirl at 3:44 PM