After more than a year of working on a particular project, and having launch dates continually pushed back for reasons which continue to pop up out of unexpected places, reaching any sort of finish line feels like something to be celebrated.  It isn't what we initially planned, and it isn't done by any means.  In all likelihood, it will never be done because it will constantly evolve.  But there was a mark of completion that I was able to check off this week, and thus, baked goods needed to be particularly good.

To me, that means red velvet.  There is a right way to do red velvet, with buttermilk and cocoa and not just using food coloring and chocolate cake.  I aim to one day complete a true red velvet myself.  But for now, when I do red velvet, I'm cheating.  In more ways than one, because these came from a cake mix.  The recipe itself even comes from Duncan Hines.  I like taking something basically readymade and doctoring it up to make it my own.

I followed the recipe, substituting cocoa-roasted almonds for the walnuts for that additional chocolate factor.  I also ended up with about 3/4 a cup of semi-sweet chocolate chips, but I filled in the rest of the cup with some white and milk chocolate chips as well.  Because I like my brownies to have as much chocolate  as possible.  Not just because it's chocolate, but because I prefer a dense, chewy brownie.  It may be made from cake mix, but it's not supposed to be cakey.  I also didn't do the fancy frosting marbling, and I considered just leaving them 'naked', because they were already rich enough on their own.  Instead, I just used a reduced-sugar canned frosting.  It was in the pantry, and, um, reduced sugar means it's not that bad for me, right?

I say me, but really I mean me and everyone I work with.  Because I'm not taking full responsibility for a tray of those things.  No no no no, I must spread the guilt around to those near and dear to me.  And so I set out another temptation in our little cubicle kitchenette/coffee area: 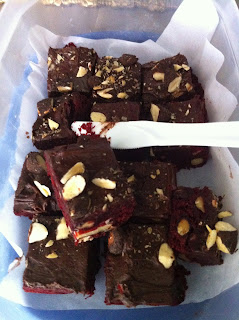 I like that someone took the initiative to get a knife involved to cut even smaller pieces.  The person who did this did not just eat half a piece, though.  He cut half a piece so that he would only have eaten a total of one and a half rather than two.  Maybe next week I'll bring something 'healthier' in to make them feel good about themselves.  Like muffins.  Healthy, healthy muffins.
Posted by unionjgirl at 3:50 PM