There's probably a really interesting graph out there that could chart my confidence level rise and fall during the course of any baking session.

It begins relatively high at the start, as I search through various recipes and narrowing down the contenders.  I think crazy thoughts like 'Maybe this time I'll try puff pastry!' or 'I wonder if the humidity is right for meringues'.  I usually even out a little as I make my final decision, but there's still a sense of 'Sure I can' that shows itself in my alterations an improvisations.  From the demure switching of chocolate chips for butterscotch ones, I've gone as far as mixing and matching various recipes in more fundamental ways.

This is usually followed by a dramatic fall in confidence in the time the treat spends in the oven.  I don't know if it's the waiting, or the fact that I still don't quite trust myself to decipher the various terms that recipes use to define 'done'.  Just how golden should the edges be, and what is 'barely set'?  This terror will sometimes abate when they emerge from the oven looking delicious.  But sometimes it takes a few people telling me how tasty it is for me to believe it.

This was one of those times, because my pesky 'done' identifying skills were not up to par with these shortbread bars.  I made a few mistakes.  First, I made my bars about twice as thick as in the original recipe by using a different pan, and needed to adjust the baking time accordingly.  Which I might have been able to do, but I realized half way through baking that the oven was set to broil rather than bake, so the heat was coming from the top.  That made it impossible to connect a golden top to a fully cooked bottom.

When I finally committed to taking them from the oven, I just hoped they were done.  After they had been cooled, glazed, cut, and were about to be served, I was pretty sure that they weren't.  But rather than admit defeat, I decided that because this was a shortbread (and thus eggless), I wasn't risking illness to offer these up as 'soft shortbread bars'.  And everyone loved them, yet again.

The recipe is wonderful, as testified by the fact that I was able to come out with something that people loved.  I would absolutely make it again, this time trying to do it right.  But this particular blogger has so many other recipes I want to try, I'm sure I'll be trying those first. 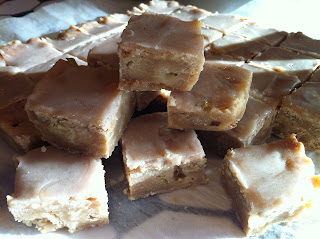 Posted by unionjgirl at 3:54 PM