What can I say, I'm a giver.  I've written before about how I donate blood every time the drive sets up shop at work.  It's just a little something that makes me feel like I'm doing good, and as long as I don't faint, it's really not a lot of effort on my part.

But what really makes me a giver is what I do with the cookies that are offered as the reward for a hard day's donation.  I prefer to snack on an apple than cookies in the middle of the afternoon, so I bring my own post-poke fruit, and snag a pack of cookies for later.  Or in this case, a pack of cookies to add to my collection of pantry goodies for later baking use.

I suppose that we all imagine that others think in a similar way as us, but every so often you are shown how untrue that is.  Because to me, I see Oreos and immediately see them fitting perfectly in the bottom of a cupcake form.  From there, my mind follows a logical path to Oreo Upside Down Cheesecake.  But my co-workers were amazed that I had come up with such a delight.  There's clearly a sweet spot where the nostalgia of Oreos meets with the decadence of cheesecake and results in people taking the time to stop by my cubicle and thank me for a particularly delicious treat.

I'd like to take all of the credit, but in fact a quick Google search proves that while I may be unique to my office, I am certainly not the only person on the internet to think of this.  The recipe I used even comes from Kraft, so it's relatively 'established'.  This was my first foray into cheesecakes as an independent, adult baker, so I wanted a tried, tested, and true recipe.  This was certainly that.  And as much as I'd like to take credit, I don't think the reason they tasted so good was because of their good samaritan origins 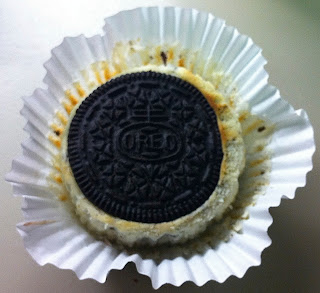 Posted by unionjgirl at 5:48 PM