It seems that I just can't move on from the Valentine's-inspired treats, because I couldn't resist taking some chocolate-covered cinnamon candies and using them like chocolate chips in a cookie.  But clearly these are not a seasonal dessert, because my co-workers loved them.  I actually caught a little exclamation of dismay from one who was too late in going to grab a second cookie later in the day and discovered that they were already gone.

Given the response, I'll probably try these again.  I don't know whether I'll be able to find the chocolate-covered candies again, but I think substituting half semi-sweet chips and half candy would work.  I have a few ideas for next time.  First, adding some cayenne pepper to the cookie dough itself for a little extra kick.  I would have done this initially, except I didn't have any on hand.  And then, someone mentioned that marshmallows would be a welcome addition, which has me thinking about play on rocky road.  Until then, I'm happy with this first batch. 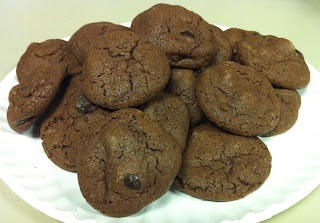 
Directions:
Posted by unionjgirl at 12:05 PM