(I didn't get a chance to write up last week's treat, so I'm catching up now.)

Valentine's Day can be taken sincerely or cynically.  Either it should be the most romantic date night of the year, or it's a conspiracy to sell flowers and Hallmark cards.  I've fallen somewhere in the middle with office treats the past two weeks that have hinted at the theme of the holiday.

Last week, it was chocolate and cherries.  To me, that's the first thing I think of, I just imagine a heart-shaped box of cherry cordials.  Of course, I imagine them being eaten while sitting on the sofa and watching TV in pajamas rather than being given them by an actual valentine, but that's where the cynicism comes in.

These brownies, however, were not cynical, they were delicious and decadent.  And the fact that it left me with leftover sweetened condensed milk was a complete bonus.  The recipe is a play on magic layer cookie bars, but using brownies and whatever mix of toppings you'd like. 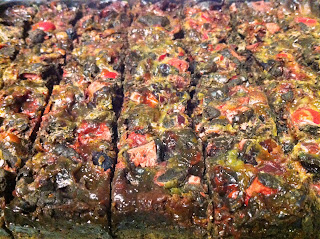 I adapted Bake or Break's recipe by using a boxed brownie mix, combined with cherry-flavored chocolates (like M&Ms and 3 Musketeers) and some dried cherries.
Posted by unionjgirl at 2:50 PM