Whenever I bring my treats into the office, I feel like a parent dropping their kid off at kindergarten for the first time.  I'm a little bit proud, a little bit scared, a little bit excited.  I know I should just leave them to fend for themselves and make friends, but I want so desperately to follow them around and make sure everyone likes them.

Is it wrong to think of baked goods as children?  It's probably wrong.  But then again, it's also probably wrong to make a frosting sandwich.  Out of bread baked with ice cream.  So wrong is clearly not something I'm concerned with.

But back to the metaphor.  These were yet another child that I knew was gifted with deliciousness, but their uniqueness made me anxious to explain exactly what they were.  I usually try to come up with something snappy, but this time I just reverted to 'bread made from birthday cake ice cream then sandwiched with frosting'.

This recipe is really very, very simple.  Aside from returning the recipe to it's original loaf pan rather than Bundt cake shape, I didn't change much from Katrina's recipe.  I did bake it longer, and even then found it ever so slightly underdone in the center.  One thing I did which I've left out of the recipe is the addition of chocolate chips.  Because though they were delicious, they made slicing thinly more difficult.  You could, of course, make your own frosting.  I do think that you would want to go with something light and fluffy like this Cool Whip frosting, though.  Nothing too thick or overly sweet.  Because that would be too wrong.

The reason I chose the name Dessert Tea Sandwiches is because I think these would be perfect at a little girl's tea party.  You know, for those of you who are parents of actual children, and not just cupcakes. 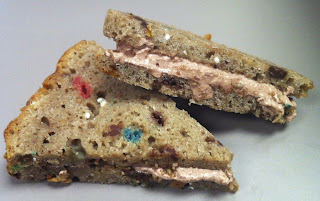 
* Leave on the counter for 10-15 minutes, or scoop some out and microwave for short bursts (not entirely melted).  Measure after softening.

Posted by unionjgirl at 5:18 PM