Remember how I went on a roadtrip on Saturday and came home with a spinning wheel?  That was a fantastic finish to what was already a very exciting plan to meet up with a fellow Raveler and surprise her with spoils from several members of our group.

They had been sending their contributions to the uber-package for the past couple of months; yarn, knitted items, tea, buttons, books, we collected a big box of things for her.  And because she's known for making and sending the fudgiest, most deliciously chocolate brownies, it only seemed to make sense that I should bake something for her as well.

Deciding on what to make was tough precisely because she is a baker herself.  I obviously wasn't going to do brownies, because they wouldn't be better than hers, and if she wanted them she would make them for herself.  What could I make that would be delicious, special, and travel well in the car for five hours?

The answer is Jaffa Cakes. A sponge cake/cookie base with a jelly center and covered in chocolate.  Traditionally, that jelly is orange.  But if you're going to make something at home, you might as well take the opportunity to change things up, right?  Plus, I knew from some of her posts that she liked cranberry.  So once again I played to the season and went with an autumnal flavor.  I also added some orange notes to the cakes and the chocolate because she liked that combination.

What I'm most excited to pass along to you all are the tricks I came up with to make creating these a little easier.  Notably, the use of cupcake and mini cupcake pans, tablespoons and teaspoons, to create some uniformity in the size and shape of the cake and jelly.  And take my advice on freezing them before coating in chocolate.  It gives you just that little bit of a head start in not ending up with oozing jelly chocolate mess.

This is one of the more involved recipes I've done, which is one of the reasons I wanted to make it.  It's the kind of treat that most people, even bakers, wouldn't necessarily make for themselves.  But it's so satisfying to get to the end of the process and look at a tray full of your very own, homemade Jaffa Cakes.  And then even more satisfying to give them to someone who loves them. 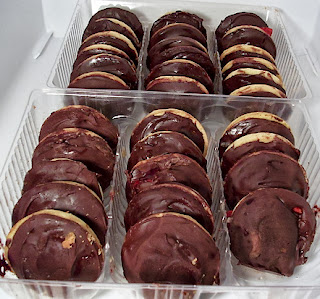 For the chocolate coating:

Makes the cakes:
Assemble and coat:

Posted by unionjgirl at 4:28 PM