So this week's post is a little late in the Saturday night, and that's because of two things:


There are a couple of things I could tell you about, like all of the new cowl patterns I favorited in search of just the right one to knit for an upcoming swap.

But for now, it's late.  I'm full of soup, salad, and frozen yogurt.  I had an awesome day, which was inspiring in oh so many ways, not the least of which was this one: 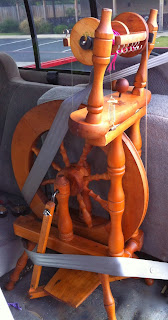 I brought home a wheel!  I'll save the formal introductions for another time, but I'm so excited!

I'd love to read your first wheel stories in the comments, and any advice you have for transitioning from spindle to wheel.  As always, there's more inspiration at Woolen Diversions.

Posted by unionjgirl at 7:24 PM