I hope neither you nor my coworkers are getting sick of my fall-flavored recipes, because here's another one I brought into the office last week.  It starts with the seasonal Pumpkin Spice Hershey's Kiss.  When I think of baking with Kisses, I think of those peanut butter blossom cookies with Kisses stuck in the center.  I don't know why there's no peanut butter Kiss variety out there, because it would be perfect for those cookies.  But in the meantime, I decided to give the classic recipe a seasonal twist, and gluten-free to boot.

I actually made these twice, slightly tweaking the ratios of peanut butter, pumpkin, and sugar between the two attempts.  The pumpkin is the crucial factor, because of the moisture it brings to the batter. Even with the reduced amount, you'll notice that I bake these in mini-muffin pans rather than forming cookie dough balls.  That's because the batter just doesn't quite come together enough to manipulate it.  But once baked they are structurally sound, though the more pumpkin you use, the fudgier the blossoms.

The first time around I used a 1:1:1 ratio of peanut butter, pumpkin puree and white sugar.  For the second try I reduced the pumpkin and mixed in a honey nut butter I had on hand.  Because of the added sweetness, I reduced the sugar. I also switched from brown to white, just because that seemed to go along with the flavors.  Both were tasty, but the second version baked up a little prettier and had a better texture in my opinion, so that's what I've included here. 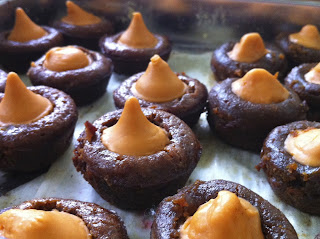 Posted by unionjgirl at 3:15 PM