There is no such thing as a failed cake.  There is only the opportunity for cake balls, or cake truffles for those of us who don't like the word balls.  Especially when I already have peas involved, it's best not to give third graders any more reason to snicker.

Remember when I baked up a batch of cupcakes using a boxed mix and pea puree?  I mentioned at the time that I had tried making a cupcake with pea puree from scratch using a recipe from the James Beard Foundation.  It's a very yummy cake, dense and moist.  But they didn't really rise much in their paper wrappers so they weren't aesthetically right for that week's treat-bringing festivities.  If you want to try the original cake with strawberry marmalade topping, though, I think that would make a fabulous dessert.

Anyway, there's no use crying over unpretty cupcakes.  So instead I reached for the boxed mix, and in the meantime I put these cupcakes in the freezer in an airtight container.  When I was ready to make the truffles, I just let them defrost and treated the way you would any other cake destined for truffling.  Yes, it's a verb.  As of now.

The cake was moist enough that instead of a can of frosting, I just used a little milk to bring it to ball-shaping form.  This has the added benefit of keeping the truffles from being overly sweet.  And then, unlike when I first made cake balls, I cheated and used 'vanilla coating' instead of melted chocolate.  I'm still just a little traumatized by the seized chocolate, I think.  This was much, much easier.

I know that this is kind of an outlier of a recipe.  The chances that anyone is going to want to replicate it  in the way that I made it are slim.  But take it as a proof of concept for various truffle tactics.  And as proof that just because it's cake with a candy coating, that doesn't mean that it can't have a hidden serving of veggies.  Skip the dried pea garnish, and who is to know that the green didn't just come from food coloring in an effort to match the minty flavor and be festive? 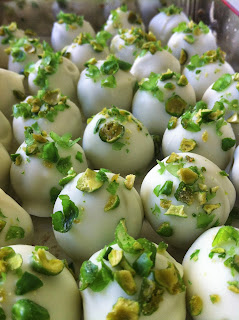 Posted by unionjgirl at 3:44 PM