I'm going a little out of order here since I haven't blogged about the cookies I made last week, but since these were so timely, I wanted to make sure and show them off while they were relevant.

I'm surprised that more people don't know what Jammie Dodgers are, because they are delicious.

Two shortbread cookies with jam sandwiched between them, they are a classic British cookie.  They've even been featured in 'Doctor Who', although I'm so behind on my seasons that I haven't seen this episode yet:

Which is why I was surprised that fewer people seemed to have heard of these than knew was stollen was when I made bread pudding.  That didn't keep these from being delicious, but it did mean that I had to explain the awesomeness of my baking punnery.  I had wanted to make something for the 4th of July, so I brought in the classic red, white and blue, then made the cut-out a star rather than a heart or circle, and I called them...Uncle Sammy Dodgers!

Armed with such a pun, how could I not stage a little patriotic photo shoot? 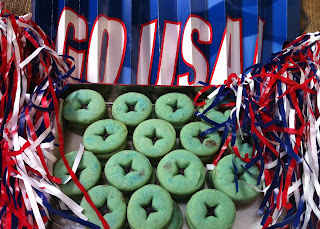 My notes:
Posted by unionjgirl at 9:56 AM