Knowledge is a dangerous thing.  Because now that I know the only thing needed to make caramel is a microwave and a can of sweetened condensed milk, which is something I pretty much always keep in stock in my pantry in case I need to make some fudge.

I had heard that I could make dulce de leche sauce by boiling the can itself, but I also read that there might be some reasons not to, like the risk of the can exploding if the water level became too low, or that the can itself might impart some not-nice things.  So when I found some examples of people taking the condensed milk out of the can and using the microwave, that seemed the best place for me to start.  I don't know why, but I still avoid double-boiling.  I'll get there eventually.

A package of chocolate-covered pretzel rods were the first ingredient I had decided on.  I thought about using them to create a crust, but in the end went with something simpler so that I could take time for the second ingredient I had decided I would need: that caramel.  It just seemed to be the logical next step when you already had salty and sweet.  So I found a blondie recipe with pretzels and caramel and went from there.

Another success, and just the beginning of my love affair with this cheater's version of caramel. 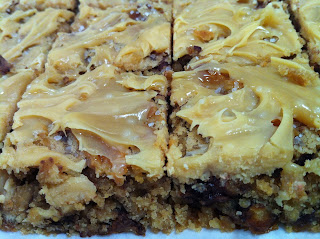 Posted by unionjgirl at 5:17 PM