So, I think I can say that I've moved beyond contemplation of insanity to commitment.  Not to an insane asylum, but to a marathon.  I haven't formally registered yet, but when I think about it, I've started thinking about how I want to train for it, not whether or not I will.  There are several options, from training programs that hold group runs every Saturday to plans I've found online that I could follow by myself.  Whatever I end up going with (I'm leaning towards Austin Fit right now, thanks to a commenter in my previous post), I have over a month until I enter the time frame for any of those programs.  So in the days before t-minus 26 weeks to the marathon, my goal is to extend my current conditioning from running a few miles at a time once a week to running a few miles at a time multiple times a week.

Marking the start of my pre-training training, I ran the Maudie's Moonlight Margarita Run last night.  If you remember, last year I celebrated reaching the finish line and refueled with a cupcake: 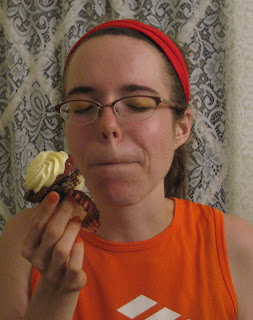 This time, it was frozen yogurt.  My mom once again helped me avoid the chaos of event parking by dropping me off, then settled herself in at The Yogurt Spot for some quality knitting and wi-fi time, with some tasty yogurt refreshment.  Further adding to her case for Mother of the Millennium, when I was done running, she got back into her truck and picked me up, with a bowl for me.  The frozen yogurt didn't last long enough for an at-home photo, so you'll have to imagine the bowl in my hands instead of the cupcake.  Same savoring-the-deliciousnee face, though.  Green Apple and Tart, mixed with pineapple, strawberries, kiwi, and a cherry on top.  Yum.  In true Yogurt Spot fashion, their Green Apple compares wonderfully against the others I've tried recently, and their Tart is fabulous as always.  Their prices have risen, though, from 43 to 49 cents an ounce.

Have you seen the commercial for Lay's potato chips where the woman is having her nails done, but just can't resist the greasy, salty goodness?  It makes me shudder just thinking about it, because the idea of the chip crumbs stuck in her still-wet polish is really disgusting to me.  I mention this not because I ate potato chips after my run as well, but because before my run I painted my nails with a quick coat of China Glaze's Papaya Punch before running this year, a slightly different shade of orange than last year.  I find that a fun nail polish is a helpful psychological trick in physical exertion.  Whether I'm keeping up the pace on the final lap or pulling the last rep on a bicep curl, seeing a glimmer or glamour while I'm feeling distinctly unglamorous can give me a boost.  And the fact that these colors coordinate with my lovely company-provided racing singlet makes it even more powerful.

The connection to that Lay's commercial is also because this color could just as easily be called 'Cheeto Orange'.  But that would probably not be as appealing to their target audience.  I do kind of like the idea of a whole line of polishes inspired by junk food.  Or maybe a collaboration between OPI and Ben & Jerry's.

I know, I'm weird.  But considering the pun in this post's title, what did you expect?
Posted by unionjgirl at 12:31 PM