I told you about last week's cubicle move in my WIP Wednesday post.  One of the downsides of our new 'neighborhood' is that our team has lost a space we called 'The Pod', an isolated quad of combined cubicles with a projector that served as a great impromptu meeting space when all of the dedicated conference rooms were already booked.

Over the next few weeks it will be totally deconstructed to make way for not just new people but a whole new floor plan, so the usual coffee social became a wake for the area, complete with eulogy given by a former manager (wearing a kilt!), memorial light show, and, of course, baked goods.  This was the first time I'd really been 'commissioned' in a sense to bake something.  After offering my services, a co-worker requested cupcakes as a crowd pleaser.

So cupcakes it would be.  But not just cupcakes.  Oh no, I decided I needed pod cupcakes.  I did a little research in hopes that there would be some obvious food that pod people ate in 'Invasion of the Body Snatchers', but no such luck.  So instead, I decided that the play on words was going to have to be peas in the pod.  I figured it sounded just crazy enough to work.

First, I tried a James Beard recipe for pea cake made from scratch, and it turned out alright, like a nice dense, moist snack cake.  But they didn't rise much, and I ended up with 15 cupcakes that were only 1/2 to 2/3 full.  If I'd had the energy to make another batch, I could have done that, but it's really a recipe that should be done when you have an electric mixer on hand.  So I turned to a standby box of cake mix and applied a tried and true mantra: substitution.  You can use almost anything you like in place of the oil called for on the box, from the often suggested applesauce to, well, pea puree.

Because the mix flavor was just a yellow funfetti, the resulting cakes were a very pretty spring green.  In a chocolate cake, you probably wouldn't even know the veggies were there, the taste certainly doesn't give anything away.  A few people were skeptical about these, I even caught some people (who weren't part of the event, but were in a second meeting where leftovers were brought) wondering why anyone would put vegetables in a cupcake.  But those willing to try loved them.  And all the more for the fried green peas I found in the trail mix section of the produce area at HEB. 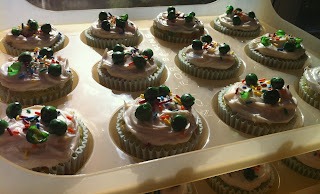 Directions:
Posted by unionjgirl at 3:33 PM