I love leftovers, but I rarely leave them in their original form.  Grilled chicken with a side of steamed veggies one night will be chopped up and mixed together to make some savory pancakes for the next.  It's not that I never eat the same meal twice, because I very often do.  Just not generally from the same 'round' of ingredients.

Now, chicken and veggies are obvious leftovers.  But brownies?  Who has leftover brownies?  Well, I did.  They had somehow survived the gauntlet of office treats and made it into the freezer.  Rather than just thawing out the squares for late night snacking, I knew I was going to have to give something else a brownie boost.  I thought about ice cream, I classic choice.  But rather than selfishly create a dessert for myself, I reinvested into another baked good.

Any time you have something you want to just toss into a baked good, cookies are a pretty safe bet.  You can substitute almost anything for the traditional chocolate chip.  Including chunks of brownies.  Other than milk, the best beverage for a nice brownie, cookie, or brownie-stuffed cookie, is hot chocolate.  So why not also use a Ghiradelli hot cocoa mix in place of regular cocoa and some of the sugar?  There is no reason why not, and so the recipe I found was one using hot chocolate mix, and I just made the brownie substitution.

These were soft, chocolatey, and delicious leftovers.  And don't worry, I don't have any cookies left over to put into anything else! 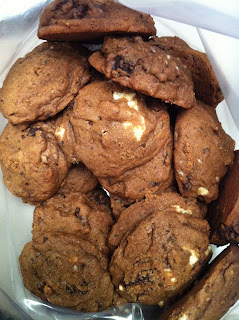