My new office area is bigger, not for me personally, but in terms of the number of cubicles gathered together.  I'm still teaching myself all of the various ways to navigate the maze of meeting rooms and paths to and from my desk.  Along with this new terrain, comes a new, wider potential audience for baked goods.

Our little Keurig machine often has a line of people waiting in polite desperation for their turn for caffeine dispersal.  And just like the limitations of a single-cup coffee making system, I don't know if I'm prepared to service all of those people.  I like sharing my treats with my co-workers, but I don't feel the need to be churning out hundreds of cookies in order to make sure everyone gets one.  This isn't like chewing gum in 'Blazing Saddles':


Hopefully no one's offended by that clip, I kind of grew up with that movie.  Anyway, I've been trying to figure out how to disperse my treats so that I make sure that I have enough for klatch, and that any leftovers go first to those who at least know who I am, while also not ending up with uneaten treats to take home (I don't like to just abandon them at the end of the day to possibly be thrown out).  I'm considering setting up a little tray in front of my cube, along with a corresponding mail list of people to alert that they can come grab a treat.  Maybe with a trompe l'oeil of a window, so it's like grandma's pies cooling on the window sill.

Last week's treat shows you the dynamics of having so many people served by one coffee area and one baker.  This recipe made 48 mini-muffins.  Twelve went to work with my mom, so that left me with 36.  Of those, I set out 18 in the coffee area around 2 pm.  At 3 pm I came back from klatch to find that only 1 lonely mini-muffin was there.  I had another dozen left from klatch, so I restocked.  Another hour later, and those had disappeared.  Assuming that no one was stuffing multiple mini-muffins, that's two dozen in two hours.  Which tells me at least that these were tasty.

The marmalade in this recipe is the same as I used in the Marmalade-n Savory Thumbprints.  I wanted to go ahead and polish this yummy stuff off, and again I felt like something with corn meal was the right way to go.  After filling the mini-muffins I had a little bit left in the bottom of the jar, hence the improvised glaze fashioned out of marmalade, orange juice and nut butter, which I had in the pantry.  I liked the additional sweetness it brought to the overall balance of heat in these savory muffins, but you could just as easily substitute honey, or just use more marmalade (if you have it) and orange juice. 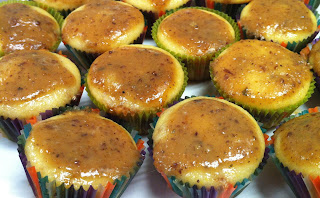 For the filling:
For the glaze:
Directions:
Posted by unionjgirl at 3:37 PM