Is there anyone out there who hasn't eaten raw cookie dough?  It's so delicious.  But like many of life's pleasures, it is illicit and just a little dangerous, because of that uncooked egg.  I am willing to take my life into my hands for the sake of a taste of my cookies (and cakes and brownies and anything else) as I'm making them, but of course I'm not going to subject my coworkers to such cavalier snacking.

Fortunately, the lure of cookie dough is strong enough that we have developed recipes specifically for dough which will never be baked.  Which brings up an existential question: if it's never going to be baked, is it dough?  Is the very state of dough as something which shall be baked intrinsic to the definition?  Is it possible for a Sarah Lawrence student to spin this into an entire paper, perhaps for some class on the anthropology of food?

If an SLC-er were to attempt such a thing,  The Cookie Dough Lover's Cookbook would have to be a top resource.  An entire book of recipes just for cookie dough?  It's a beautiful thing.  The book is still on my wish list, but some basic recipes have made the rounds on several blogs, to which I applied my patented strategy of treating every ingredient as an opportunity to amp up the flavor profiles.

Cookie dough is the old school when it comes to cookies that aren't cookies.  The trendy new way to subvert the baked good system is cookie butter.  For those who haven't yet become addicted, it's like peanut butter...but with cinnamon cookies.  So when making cookie dough balls, why not bring cookie butter into the mix?  And hey, Dove has brought chocolate into the mix, so why shouldn't I?  And then once you've done that, you might as well embrace the snickerdoodliness of it all and roll the balls in cinnamon sugar.

I have a dangerous mind.  Dangerous and delicious. 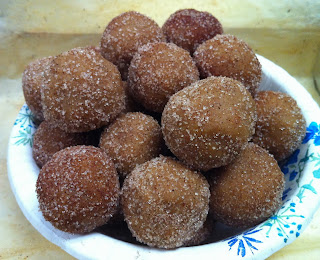 
* Or any small piece of chocolate you have on hand, about 1 cm square