There's a fine line when you're combining flavors, between fantastic taste explosion and muddled mess.  I'm always aware of this line, and I fear crossing it.  What I never fear is sweetened condensed milk.  Magic bars come in all varieties, but I think the condensed milk is the pixie dust that makes it work each time, blending the flavors and creating a delicious gooey texture.

This particular magic bar continued my theme of fall and began with some seasonal Milky Way bars: caramel apple.  I wanted something that built on the caramel apple-ness of it, but because it is also ultimately a chocolate candy bar, I didn't want to miss out on the chocolate aspect.  The addition of cinnamon in the chocolate dough adds just a note of warmth, while the pumpkin butter really drives home that fall flavor.  If you have apple butter, though, that would be even better.  The condensed milk definitely echoes the caramel of the Milky Way, and a sprinkling of sea salt seems to be the trendy way of setting it off.

These are thick, gooey, and rich.  And I'm proud to say that one coworker called these the most deeply flavorful treat yet.  So I'm walking that line, just like Johnny Cash. 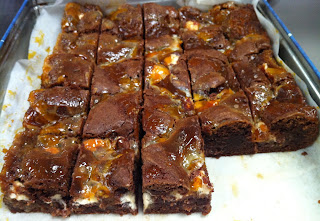 Posted by unionjgirl at 4:09 PM