I'm as excited as Lorelai hopped up on Pop Tarts and coffee, because I finally get to show you all what I was working on for all of those WIP Wednesday posts!  The swap package has been delivered, received, opened, and enjoyed.  So now all that remains is for me to share the goodies with you.

I'll start with the knitted item.  There are a few examples of cuddly knitwear on the show, but my spoilee is in Florida, so it was unlikely that she would be able to recreate this scene: 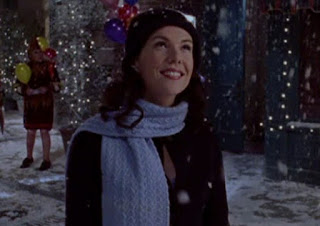 So rather than knit the scarf itself, I took the reverse-engineered pattern from Ravelry, Lorelai's Scarf in Blue Heaven, and mixed it up with the Lemon Squeeze Yoga Socks to create: Yoga in the Snow Socks!

Yoga socks are basically socks with no heel and no toe.  Skim, non-fat socks.  Maybe one day I'll knit the full-fat version.  For now, though, these were plenty.

I have the details of the pattern on my project page, but most of the work involved was looking at the number of stitches in the yoga socks, looking at the number of stitches in the textured repeat, and making sure it would all work out.  Particularly because the socks are knit in the round and the scarf, of course, is not.  I ended up sketching out a kind of chart, just to make sure the purls and knits were lining up.  That's the kind of thing that makes me feel like a 'real' knitter.  Even better when I finally cast off and it all looks the way it should, and fits feet the way it should.

These are yet another swap project that made me want to make another for myself.  Then I could go to the yoga classes in the gym without freezing my feet off!

In the non-knitting category, we have something completely different.  Fans of the show will recognize a simple box of corn starch as an important reference to Rory's first kiss.  Accidentally shoplifted in the romantic shock of her first kiss, Rory keeps it on her dresser.  I thought my spoilee would probably prefer something more useful than this particular thickening agent, so I did this:

I turned it into a pin cushion!  I emptied out the actual corn starch and put some gravel and stuffing in there instead, then my mom used a super glue to adhere the fabric in a pin cushion poof.  I also added a collage of images from that particular episode, but leaving the front traditionally corn starch.  Almost Warhol-ian in it's consumer imagery, isn't it?

There's one more FO I want to show you, but I have to finish writing the Examiner article on it first.  It was an old hard cover book I turned into a secret hiding place, so I figure that's Literature-related and a great excuse to write up a step-by-step tutorial.  I'll be sure to post it when it's ready.  And I still have some Joss Whedon swap stuff under wraps, so stay tuned!